The annual fund-raiser serves as a sort of homecoming to those who have been in Milan and Paris these past few weeks. 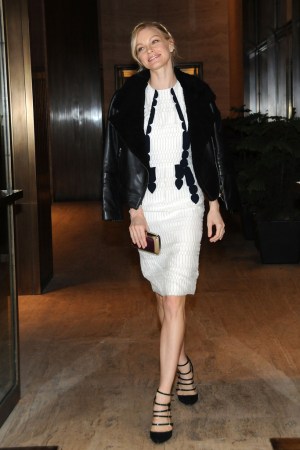 “It’s about awareness, it’s about love and treatment, and that is what Love Heals does so well,” Wes Gordon said Thursday night. He was among the fashion folk swilling around the candle-bordered pool in the center of the Four Seasons dining room for the Love Heals Gala. It’s an annual fund-raiser to benefit the Alison Gertz Foundation for AIDS Education and serves as a sort of homecoming to those who have been in Milan and Paris these past few weeks.

Gordon’s beau, Paul Arnhold, is very involved with the charity, and it seems the night held a personal meaning for others who turned up. “Some of my friends were very close with Alison,” Nicole Miller said. “I remember the whole story from the very beginning.” Bibhu Mohapatra felt similarly connected to the cause; “I have known many people who have lost their loved ones to this crisis in the last two or three decades. It still is a crisis in many parts of the world, especially where I come from in India,” he said. “I wouldn’t be anywhere else but here this evening.”

This story first appeared in the March 16, 2015 issue of WWD. Subscribe Today.

Over dinner, Arnhold introduced the Love Heals Young Philanthropist honorees Eliza and Molly Howard, who spoke of their involvement with the foundation since high school. Then the fun began, with a post-supper auction that Rafe Totengco was especially excited about. “The competitive edge sometimes makes it more fun,” he said. “It’s like guilt-free shopping.”