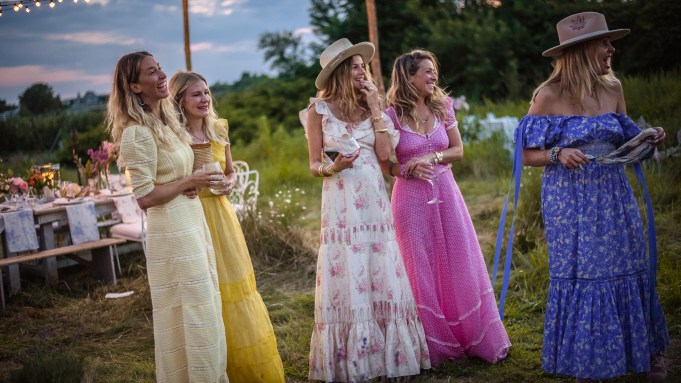 Over in Bridgehampton, the LoveShackFancy fantasy was in full swing in the backyard of founder Rebecca Hessel Cohen’s childhood home. Cohen was hosting a dinner to celebrate the brand’s collaboration with hatmaker Nick Fouquet, although there was a slight snare: all of the hats had sold out.

“I wanted all the hats to be here, but unfortunately they sold,” said Cohen. “We’re going to make more.”

A dinner table facing an abandoned apple orchard was decked in the brand’s aesthetic  — it is launching table linens when it opens a store in Palm Beach in early December — and each place setting had a small tube of matches.

“Oh my god, you guys are so cute,” said Fouquet upon seeing the party favor, a nod to the match sticks that adorn many of his hats. “The matchstick for me, it’s just the spark of inspiration,” he added.

The hatmaker was staying in Sag Harbor and headed to Montauk for the rest of the weekend, where he had a popup and was hosting a dinner with Donovan Frankenheimer.

“By the way, your mom’s my favorite person at this party,” he added, turning to Cohen. “I want to leave here to go hang with her. I was like, let’s get you drunk and listen to Donavon Frankenheimer, because it’s all you want to do.”

After paella followed by pie and s’mores by a campfire, guests — for the most part, all dressed in LoveShackFancy; Jimmy Buffett, who was on the guest list but didn’t make it, would have been a rare exception — mulled the final weeks of summer; there were kids to pick up from summer camp, collections to design.

“I have a lot of my meetings out here; as much as I possibly can,” said Cohen, and it was easy to see why: twinkle lights and a rustic dining shed set an idyllic, if homogenous, scene. “While it’s summer, it’s my environment and I feel like so much happens in these three months of summers, that we need to soak it all up.”