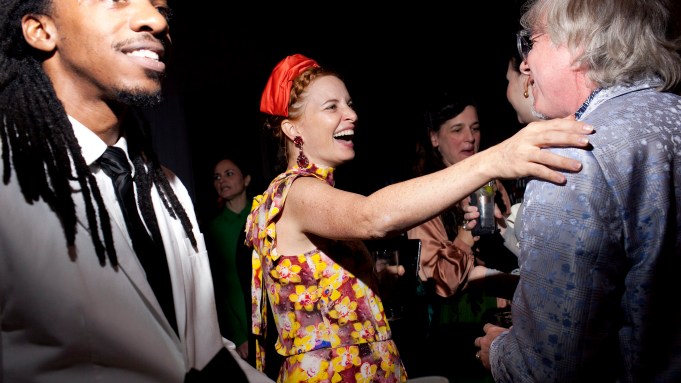 “Food is fundamental to any development, growth or change. It all has to be fueled by food,” said Topaz Page-Green on Monday night from the 17th floor at the Public Hotel. Case in point: Page-Green had assembled a crowd for Prada and the Lunchbox Fund’s annual benefit dinner (prepared and donated by Jean-Georges), which in turn supported the initiative’s goal of providing food to vulnerable schoolchildren in South Africa. By turning people’s attention to the topic of nutrition, Page-Green hopes to illuminate the importance of food as a fundamental agent for change.

“We’re feeding 25,000 kids, but there are 4 million kids who do not get any food during the day and nothing at home,” she said, describing the effect of the organization she founded over a decade ago. “I think it’s just a matter of being able to reach more kids, have more kids be able to develop, grow and concentrate and get an education, and contribute to the socioeconomic wellness and workforce of the country, and bring the country up and out of the dilemmas it is in.”

Helping her champion the cause were event co-chairs Billy Crudup and Rain Phoenix. Crudup got to witness the organization’s mission firsthand a few years ago, after winning the event’s raffle for an African safari.

“It’s not some corporate entity who are putting things together, it’s people on the ground who are trying to make an impact in what feels like at times a chaotic environment with many people in need,” said Crudup, who brought his son along for his visit to Cape Town. “I’ve really been moved by [Page-Green’s] dedication,” he added. “It’s so hard to do anything — getting through your day as an adult is no easy task — so to be able to give in this way, too, it’s beautiful to me. It’s beautiful to me philosophically, and then it’s incredibly moving to me practically because I saw the work they’re doing. It really is people helping other people.”

Phoenix was tapped for the live fundraising portion of the evening, cajoling the crowd to publicly pledge their donation. (A silent art auction, featuring donated works, will also benefit the cause.) “Even though we’re talking about schoolchildren in South Africa, they are as worthy as our nephews and our children, our nieces and cousins, all the people we would gladly send a check to or offer support to,” she told the crowd, before sharing a story from cocktail hour.

“One of the guests here tonight had to explain to her children why she wasn’t going to be home, and she explained that she was going to the Lunchbox Fund event for children in South Africa, schoolchildren who couldn’t otherwise eat a meal and help them to study,” she said. “These two children emptied their piggy banks and gave their mom the coins and money they collected. If they can do that, I think we can raise our hands and pledge some money here tonight.”

The evening raised funding for over a million meals.