LVMH Employees Rally for a Cause 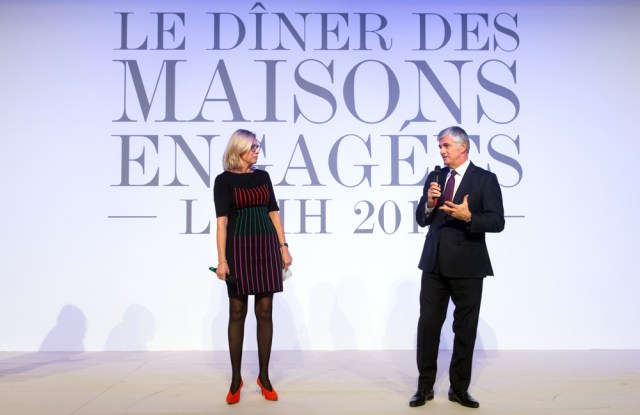 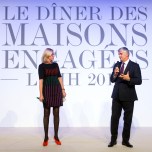 PARIS — The crowd rose to its feet as American singer Shola Adisa-Farrar delivered a spine-tingling a cappella version of “We Shall Overcome” with its refrain, “We shall live in peace, some day.”

Given the recent terror attacks in Paris, it was a poignant moment as employees of LVMH Moët Hennessy Louis Vuitton gathered at the Palais Brogniart Thursday night for its fourth annual Dîner des Maisons Engagées, a charity gala to benefit the pediatric hospital Robert-Debré and its research into sickle cell anemia, one of the most common genetic conditions in France, mainly affecting people of African decent.

LVMH group managing director Toni Belloni, welcoming the guests from the stage, scanned the 330 people in attendance and marveled, “Next year, we may have to rent the Grand Palais,” referring to the giant glass domed venue built for the Universal Exposition of 1900.

Chantal Gaemperle, LVMH’s group executive vice president, human resources and synergies, praised employes for “mobilizing for a cause” by buying tables at the event and donating luxury handbags, perfumes and liquors for a raffle, the latter benefiting the Kelina association, which is raising funds to build a nursery in Benin.

The event was a chance for the chief executives of Givenchy, Kenzo, Guerlain, Dior Parfums, Veuve Clicquot, Chaumet and Sephora to pose for photos with their teams against a logo wall, and to boogie to Adisa-Farrar’s closing song, Stevie Wonder’s “Master Blaster.”

There were touches of glamor as willowy Flora Coquerel, Miss France 2014, handed out the raffle prizes and posed for photos with winners.

French actor Samuel Le Bihan attended to raise awareness for his eco charity, “Earth Wake,” on the eve of the climate summit COP21 in Paris.

He noted he just wrapped up filming a film for television called “Alex Hugo,” in which he plays a policeman. “Yes, that’s me, the hero,” he said, flashing a big smile.