L’Wren Scott sported the most desirable accessory in the room at a dinner to celebrate her fall collection: her Rolling Stones front man beau, Mick Jagger. 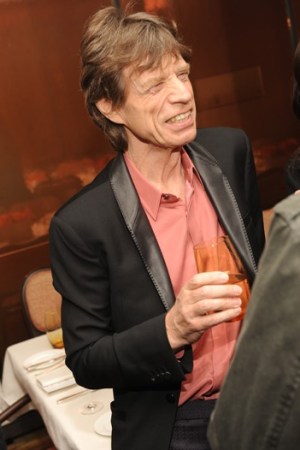 L’Wren Scott sported the most desirable accessory in the room at a Thursday night dinner to celebrate her fall collection at The Mark Hotel: her Rolling Stones front man beau, Mick Jagger.

“I’m so sorry,” an uninvited restaurant-goer interrupted, “but Mr. Jagger, my mother’s over here, and she’s 70, and it’s her anniversary, and she would just DIE to meet you.”

The rock icon acquiesced, with a light smile.

“We’re not going too far, are we?” he asked aloud, before shooting an affectionate glance at Scott, who was visibly none too amused.

“I’m not sure that woman’s father is going to love his wife ogling Mick Jagger on their anniversary,” one dinner guest said with a giggle.

Elsewhere, Christina Hendricks and Ellen Barkin chatted in a corner, hiding in plain sight from the rest of the restaurant though both were eager to enthuse over Scott’s designs.

Hendricks has famously complained about the lack of designer offerings cut for her figure, but bore no such ill-will for Scott: “Love her, love this,” the “Mad Men” actress said with a laugh, gesturing at her white scoop-necked cocktail number, which featured a flower design. Geoffrey Arend, Hendricks’ husband, was also at the party, speaking with artist Doug Aitken and at one point accidentally toppling a tray of hors d’oeuvres.

Ryan McGinley arrived late with Jen Brill in tow. The two feigned nonchalance but made a bee-line for Jagger, listening at attention with friend Dan Colen before pulling the Rolling Stone into photographs.

Rachel Feinstein entered in a whirlwind, explaining that her absence from friend Marc Jacobs’ show earlier in the week was due to her young son’s sledding accident. “Here now,” she said with a smile. “Excited to be.”

With most of the New York snow melted and most of the fashion week crowd off to London, an air of ease took hold at The Mark. Following cocktail hour, guests settled into their seats. Scott’s table was parallel to Jagger’s, and had been arranged so the pair could stay in each other’s eyeline throughout the evening. Waitstaff at the restaurant were informed not to allow any more fan-based interruptions and protected the perimeter. The rock star winked at his model/designer love as the meal was served and raised a glass in her direction.