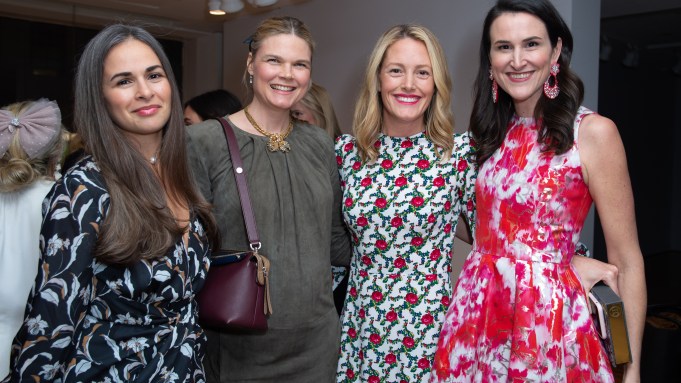 For about three months, Lydia Fenet came home from her job as managing director and global director of strategic partnerships at Christie’s and, no matter how tired she was from the workday, plunked down inside her bedroom to write her book, “The Most Powerful Woman in the Room Is You.” She set a strict regimen with a precise goal: She had to write a certain number of words, and she would not leave the room until she’d finished. According to her husband Chris Delaney, this was how she finished in time for her April 9 release date.

“She had her own little space, and she would get away from me — probably very smartly so — and get in a space where she could concentrate and figure out what she wanted to say,” Delaney explained on Tuesday night, speaking from the cocktail and dinner party hosted by Christie’s and Kering celebrating Fenet’s new book. “I was probably watching TV in the other room.”

For Fenet, the process was, at times, emotional. To write the book, she had to recount memories from her childhood that sculpted her into the person and working woman she is today.

“I saw those stories through a new prism,” she explained, standing inside Christie’s Gallery Seven, where the party was held. “These stories that I’d told time and time again, when I sat down to write I understood the greater meaning and how they worked into a larger history of my life. I think about the chapter where I talk about rejection. You go through these things and you cry through them and then you realize resilience is ultimately what gets you want you want. You can’t stop because someone says no once.”

Guests of the party were some of Fenet’s closest friends and colleagues — and all huge fans of Fenet’s tendency to speak motivational, empowering words. Dannijo’s Danielle Snyder, artist Kate Schelter, Laurent Claquin and Ashley Miles came out to support. Bergdorf Goodman president Darcy Penick also showed up, and hinted at future partnerships between the department store and Fenet (she zipped her lips when it came to the details, though). Fenet’s mother and sister also attended.

Every Look You Need to See From the 2019 ACM Awards

Before sitting down to dinner in an adjacent room decked out in all-pink decorations, Fenet touched on the structure of her book, which is organized into chapters of what a powerful woman does, and features guest anecdotes from Arianna Huffington, Barbara Corcoran and more.

“I had a target list of people I wanted to include,” Fenet said. “I wanted it to be everyone from Martha Stewart — who is the ultimate in terms of power women — but also women other women can relate to: women who have started businesses on their own or perhaps were just starting out in business so that they weren’t all recognizable names. I didn’t want it to feel like it was unattainable. I work for Christie’s, it’s the ultimate in terms of the auction world, but this is not everybody’s dream and it’s not where I started in my life. So I wanted to be true to the fact that I didn’t grow up at Christie’s, and I have grown up as a career woman here.”