The legendary Texan social fixture Lynn Wyatt was toasted at Monkey Bar on Monday night, in honor of her ongoing auction with Paddle8. 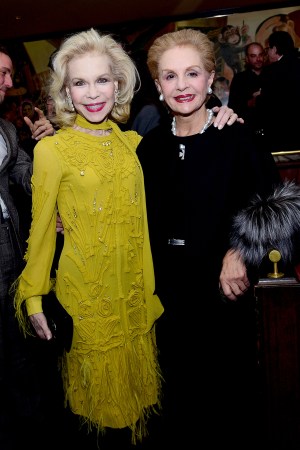 “Lynn was on the dream list of potential curators when we launched Paddle8,” Alexander Gilkes said Monday evening from the Monkey Bar. Gilkes, who founded the auction house in 2011, was joined by Carolina Herrera, Peter Copping and Tory Burch in celebrating famed Texan socialite Lynn Wyatt and her auction with Paddle8, titled “The Collector: Lynn Wyatt.” Proceeds from the sale, which is online through Monday, benefits Houston’s nondenominational Rothko Chapel.

Wyatt, who celebrated her 80th birthday in July, “was immediately sure that she could benefit the Rothko Chapel,” Gilkes continued. “The idea was to have an auction that celebrated her formidable style and assembled the talents and generosity of her friends.”

Already close to 60 percent of the items have been sold, with the art getting snatched up the fastest. “It’s everything from the trunk in ‘The Grand Budapest Hotel’ to so many of her finest frocks from back in the early days, made by designers who are long gone,” Gilkes said.

“I’m so humbled by what my friends have donated in my honor, I mean, oh my goodness,” Wyatt said, in terrific Texan fashion. “Even in my wildest dreams, it’s just all so incredible.”

She has been involved with the Rothko Chapel for many years, as “I was friends with Mrs. de Menil,” she said of the Chapel’s founders, John and Dominique de Menil. “Because of the de Menils, the Rothko Chapel is one of a kind in the world. People get off the plane and they say, ‘Take me to the Rothko Chapel.’” She is officially titled a cultural ambassador for the chapel.

The auction ranges from Wyatt’s personal collection of couture and art from the likes of Andy Warhol and Helmut Newton, as well as contributions from her set of famous friends, including Wes Anderson (said trunk from his “Grand Budapest Hotel” film; it’s custom Prada), Bono, Elton John and Tilda Swinton, who will read a bedtime story over Skype to the winning bidder.

While the couture pieces have been a little slower to sell (given Wyatt’s narrow dimensions, they have a particular fit), the chance to own part of her closet is a selling point for many. “My style is…I’ve made something up and I’ve quoted it and now I’m forgetting,” Wyatt said. “Oh yes — it’s this: my style is class with a dash of sass, but never trash.”