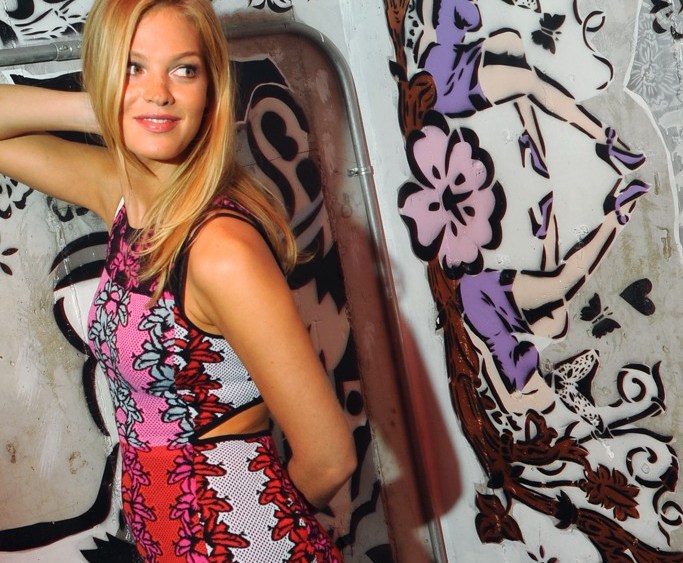 Hart eschewed traditional summer vacation plans this year for more cerebral pursuits. “I’m actually learning French at the moment,” she said. “I’ve been going to intensive classes with my friend.”

The model, sporting a slightly darker do than her usual blonde, turned to a friend and pointed at one of the hotel’s notorious hot tubs. “I went in there once,” she said, “but don’t tell anyone.”

On the roof, guests noshed on miniature lobster rolls, burgers and snow cones spiked with Grey Goose while taking in the Manhattan sunset and unseasonably chilly weather. DJs Chelsea Leyland and Harley Viera Newton, clad in different shades of pink, took care of the evening’s soundtrack behind a booth emblazoned with the words “NO REQUESTS, XO.”

Katrina Bowden, who had just returned from a friend’s wedding in London, was keen to talk about her own recent nuptials.

“Bowden is actually my middle name now. My husband [Ben Jorgensen] is super excited about it. I’m kind of old-fashioned — I’ve always wanted to have my husband’s last name,” she said. The two are heading to Hawaii in September for their honeymoon.

Rachel Roy had just returned from the Aloha State herself. “I use the summer months to travel, to inspire myself,” she said. “And I go as much as possible to the country, too — I take my daughters there to the ocean and try to just remember what it is about that monotonous sound that’s so beautiful, the waves and all that.”

Nicky Hilton, sunkissed from recent trips to Europe and L.A., said she was off to Ibiza the following week for her sister Paris’ DJ residency at the island’s Amnesia nightclub. Nearby, photographer Alexis Dahan took a drag from his cigarette. “I love this song. It feels like 1:00 a.m. right now,” he said. “I wanna go out and party, but then I remember how early it still is.”

Singer and songwriter Sara Mancuso, who records as Smokey Jones, took to the makeshift stage and introduced her pianist. “We call him Mr. Fingers,” she said, before launching into “Naked,” a soulful ballad from the perspective of a scorned lover. Jones had stepped in for Los Angeles-based singer Ginny Blackmore, who flew in for the party but couldn’t perform due to a sudden illness. Blackmore had just returned to the States from her New Zealand hometown, where her single “Bones” had shot to number one within a week.

“New Zealand’s a little small, you know, but I really wanted them to love me — it’s my people,” she said. “That was probably the most nervous I’ve ever been, actually. But you know, I love America. I think I might be here for the rest of my life.”