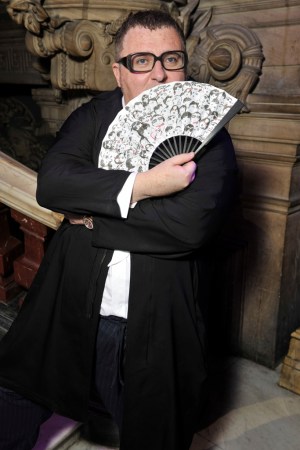 BLOOMIN’ BASH: The invitation said “Flower Obsession Ball,” and the party Monday night in Paris lived up to the theme.

MAC Cosmetics and Giambattista Valli hosted the event at the Opéra Garnier, where flowers literally bloomed everywhere. The majestic building was bathed in projected blossoms, a great wall of flowers greeted attendees in the main sweeping stairwell and petals popped up on many a partygoer’s attire.

“Look how floral I am,” said Alber Elbaz coquettishly, dressed in black and white. “I like flowers. I like everything that starts with an F — flowers. Fashion. Food.”

Noor Fares noted her favorite flower is jasmine “because of the smell and it reminds me of where I am from — Lebanon,” she said. “It also reminds me of my grandmother.”

The jewelry designer is presenting in Paris her first collection of one-off pieces, with rare stones and diamonds, called Atelier Mystique.

Bianca Brandolini d’Adda’s favorite flower is the peony. She was one of Valli’s five BFFs who had a lipstick created in her honor for the capsule collection done with MAC that’s due out starting Thursday for six weeks in the brand’s stores worldwide.

“For a girl to have a lipstick named after you — it’s just a dream come true,” laughed Brandolini, adding she had no hand in picking the pink color, but “Giamba knows me enough to know what I like.”

The other lipsticks in the line — all created in colors that recur in Valli’s fashion — were named after Charlotte Casiraghi, Eugénie Niarchos, Margherita Missoni and Tatiana Santo Domingo (many of whom were there). There is also a lip gloss.

“I got inspired looking at real women around me,” said Valli.

“The idea was dress your lips in Giambattista Valli,” added the designer, above the thumping music emanating from the main party room upstairs, where Mark Ronson and 2ManyDJs spun the tunes. “There is nothing more revolutionary in a woman’s wardrobe than changing the color of your lips. It changes totally your look and the look of your clothes.”

In a first for MAC, the lipstick tubes reflect the color of the product inside (what Valli calls his “fetish colors”).

“When it’s in your bag, you can [easily] get right away one that you want,” said Valli.

“MAC has known Giambattista back to when he first began working at Ungaro,” said John Demsey, group president of the Estée Lauder Cos. Inc. “We were there from the very beginning, when he began his prêt-à-porter collections 10 years ago and worked with him backstage. And then for couture.”

Demsey said the party was to honor Valli’s decade as a standalone designer.

“It’s the first time MAC has ever collaborated with a couturier,” continued the executive, referring to the lipstick collection. “And certainly not the last.”

Other guests at the packed affair included Naomi Campbell, Roxane Mesquida, Caroline Vreeland, Delfina Delettrez and a bevy of models.

Ian Bohen said he will start filming this fall some more episodes of the TV series “Teen Wolf” and had just wrapped a movie, called “The Tow,” with JR Bourne. It was filmed in downtown Los Angeles.

“We’re selling at Sephora, which is fantastic,” she related. “It’s three nail polish colors — a coral, a red and a nude. In the fall, we’ll have more to go.”