A bevy of actresses and models turned out at Chateau Marmont for the party. 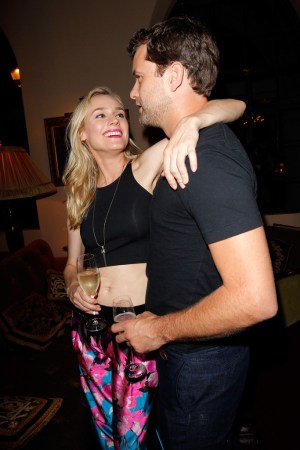 “You just say ‘Prabal’ and models, actresses and stylists line up,” said Estée Lauder group president John Demsey on Monday night of the dinner MAC Cosmetics and Vogue hosted at the Chateau Marmont in Los Angeles. The guest list had plenty of them all. Zoe Saldana, Cody Horn, Jena Malone, Ginnifer Goodwin, Rachel Zoe, Amber Valletta, Morena Baccarin, Diane Kruger and Hailee Steinfeld were on hand. After eating under the hotel’s outdoor tents, Gurung, Saldana and Valletta hit the dance floor while DJ Myles Hendrik took charge of the tunes. Valletta sashayed up to Gurung, exclaiming, “He’s a great dancer.” At 11 p.m., though, the music wound down. “Neighbors are getting cranky,” explained Gurung, sad that the fun seemed to be over.

An impromptu post-party was quickly arranged. Valletta, China Chow, Donovan Leitch and George Kotsiopoulos decamped to the nearby Bar Marmont. “Have a blast. Party your ass off,” shouted a pregnant Baccarin as she exited. The good times for MAC and Gurung could go on as their beauty pairing is apparently poised to continue. Asked whether MAC would be working with Gurung in the future, Demsey said, “Most likely yes.”

Gurung was enthusiastic about the potential of branching into beauty and would favor a global approach. “I’ve traveled all over the world. I was born in Singapore, grew up Nepal, lived in India, London and Australia,” he said. “What I’ve learned is that, at the end of the day, all women want to look beautiful, and I understand that.”