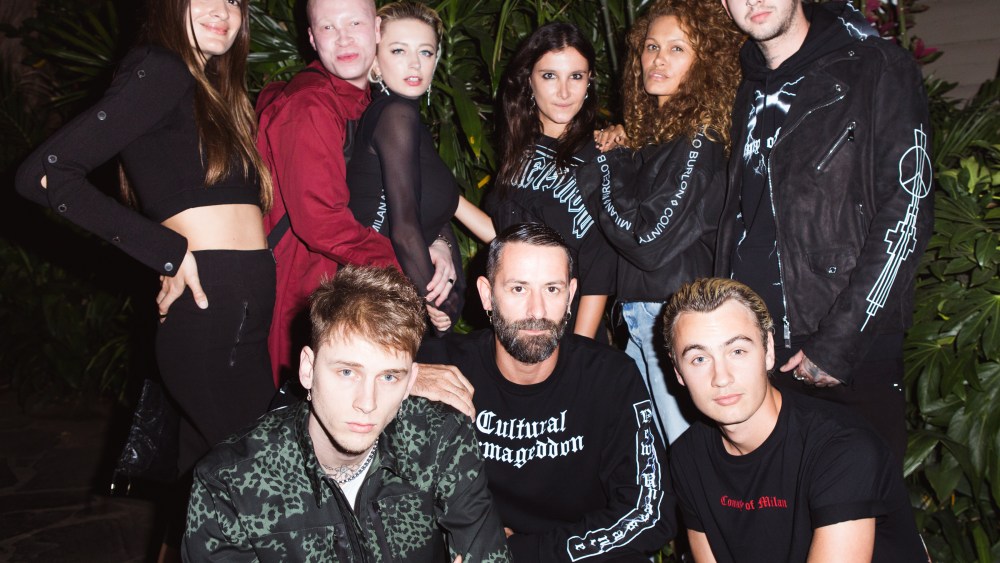 County of Milan creative director and DJ Marcelo Burlon returned to Los Angeles after a six-year absence to host a dinner at Chateau Marmont on Wednesday night for his pals Machine Gun Kelly, Travis Mills, Caroline Vreeland, Natalia and Alberto Bonifacci, Brandon Thomas Lee, Leila Yavari, Aleali May, Noa Tishby, Shaun Ross and DJ R3hab. Most attendees came decked out in his label, which he showed earlier in the day in the poolside Bungalow 1.

Fall marks the first season Burlon has shown a women’s specific collection (he started with a capsule last season), and sales have since doubled. The new collection, dubbed Melancholic Lovers, is a take off of his men’s New Renaissance collection shown during Milan Fashion Week, men’s. The familiar snake and feather motifs have been enlarged as all-over prints or rendered in embroidery on new silhouettes such as a bodycon bondage/bandage dress and a drop-shoulder oversize denim jacket with a shearling collar and cinched waist. There’s also a split-back skinny jean with a shearling pocket. In addition to his sneakers for men and women (there was a new Reebok style on display) Burlon added high-heel booties for the ladies.

“I was a club kid in the Nineties so everything is related to that moment in my life when I was coming out and discovering the world,” he said. “The symbols of [his native] Patagonia mixed with a rave and club scene are always in my work.”

The other unisex collaboration on display was with Kappa, which featured the brand’s logo combined with Burlon’s Patagonian key logo on taping on the side of tracksuits and tops.

Since launching his brand four-and-a-half years ago on Instagram, Burlon has grown a 480-store network, and now has 40 stores for his women’s line including Saks Fifth Avenue and Barneys New York. Just this past month, Bella Hadid, Stella Maxwell, Kendall Jenner and Hailey Baldwin were spotted in the pieces.

“The last week was quite intense because we had Bella and all of them wearing it, so that means they are kind of waking up. I never dress NBA players and rappers because they go and buy it,” he said. “Sometimes they direct message me on Instagram, like I met Tyga on Instagram and said, ‘Hey, let’s do a project together’ so we did a capsule for Saks that sold out in one day. With Russell Westbrook we did two capsules for Barneys. I’m always connected with them.”

Indeed, he optimizes the power of social media. “This is how we are living now, in an Internet era where everyone is running faster and if you are able to understand and really pick up the moment and live it, you know? I started my own brand through Instagram. People are listening to our voices so we need to be very careful and responsible. If I have 350,000 followers on Instagram I feel the responsibility to take advantage of my followers to make charity projects too. I don’t just want a sale. I mean, I do make money but I share it with my family and friends.”

The creative director is the driving force behind the dominant contemporary streetwear brands that he has collected in a “brotherhood” dubbed New Guards: Virgil Abloh’s Off-White, Francesco Ragazzi’s Palm Angels, Heron Preston and Ben Taverniti’s Unravel, in addition to his own brand.

“We kind of represent a new generation, the contemporary, and I think we are all in the right moment. Each of us [is] doing something completely different but somehow we belong to the same family which is New Guards. It’s a very special moment for each of us. It’s the attitude, not just the style, and all of us bring something new and we create so much noise in the retail through social media.”

Burlon sees it as his responsibility to “reeducate the new generations because people don’t really go back to the books. They see an oversized bomber jacket and think that it’s new, but people who know about fashion know that someone else did it before.”

Burlon heads to Japan on Saturday to open another store there with some BMX-type entertainment (moto style is another one of his signatures) and throw a tango party at the Argentinian embassy. “Then I’m DJ-ing a party for 2,000 people,” he added.

Of the DJ and club culture, he said he’d like to open distribution in Ibiza, and also to eventually link with a female collaborator. “We are working on that. I need to find someone who really represents our vision, not just about a pretty face, but also the background and experiences, the heart.”