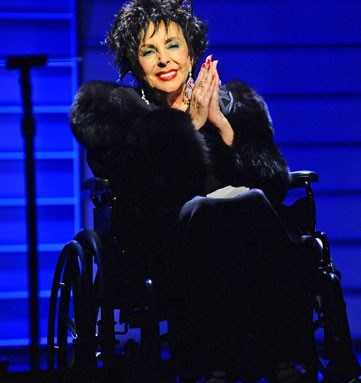 Taylor, the featured speaker at the annual HIV/AIDS fund-raiser, said, “We must be damn certain our message is heard.”

The actress, seated in a wheelchair, stumbled over her speech at times before revealing to the audience that she had forgotten her glasses and was having trouble reading the Teleprompter, which drew laughter and a standing ovation.

Auction emcee Sharon Stone said, “I do understand that we are facing the biggest economic crisis since the Depression. I know that to be here tonight, for all of you, is a sacrifice and a gift. I will ask you to open your hearts and your wallets.”

The annual fund-raiser, held in Los Angeles and in San Francisco, raised an estimated $1.45 million in its 26th year. Macy’s and its sponsors and partners have raised a total of almost $30 million since the event started.

Tommy Hilfiger and Ed Hardy’s Christian Audigier were among the guests Thursday at the Santa Monica Airport’s Barker Hangar.

The event featured Pop Art from the estate of artist Keith Haring — who died of AIDS in 1990 and would have turned 50 this year — live and silent auctions, dance and musical performances and a fashion show.

Jeff Gennette, chief executive officer of Macy’s West, expressed the hope that upheaval in the financial markets would not dampen fund-raising.

“The cause is just so important….The disease has changed over the years; it’s not as visible now,” he said.

This year also marks the debut of a related fund-raising effort, Macy’s Celebrity Catwalk Challenge, which will air Oct. 11 on NBC. The special will be hosted by Tori Spelling, and models will include NBC Universal TV personalities such as Jerry Springer, Jack Coleman and Kate Flannery, as well as musical performances by the Pussycat Dolls, Fall Out Boy and Ne-Yo. The broadcast will use behind-the-scenes footage from the Passport fashion show.

Also, for the first time this year, the Passport event will be simulcast into 27 theaters in select cities nationwide on Oct. 23, including Boston, Honolulu and Orlando, Fla., as part of an expanded fund-raising effort.