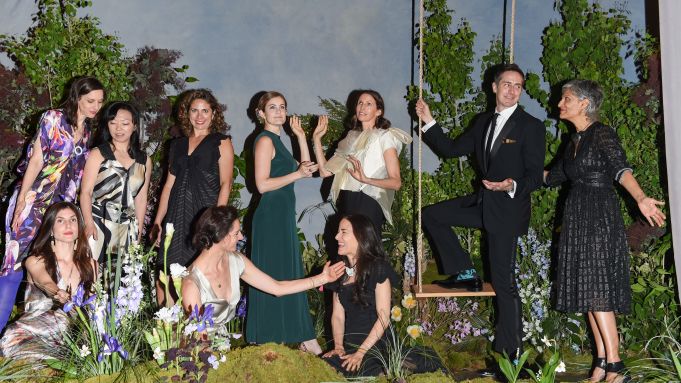 The Museum of Art and Design decamped across Manhattan to the fourth floor of the Bohemian Benevolent and Literary Association, bringing with it hordes of flowers and ladies in floral wear for its annual young patrons gala, En Plein Air. Florist Putnam and Putnam had installed a floral pastoral scene on the ballroom’s raised stage, which was inspired by Impressionist painters and complete with a rope swing, which provided a very on-theme photo op for the crowd.

“It’s sort of amazing when you think this got put up and then taken down in a day,” said MAD chief curator Shannon R. Stratton of the display, standing nearby during pre-dinner cocktails.

While flowers were the most common print and accessory of the evening (one man had tucked a custom-made boutonnière into his suit coat pocket), the night’s honoree, lighting designer Lindsey Adelman, showed up in a structural Rick Owens look. Her chain earrings called reference to her light installation, “Cherry Bomb Fringe,” hung on the walls directly outside the elevator bank. “My idea was sort of this really elegant, but indulgent, vine that creeps up the wall. I love making forms that use a lot of straight, awkward bends,” Adelman explained of the piece, which is available to purchase through an online auction to benefit the museum. “The overall effect is I want it to be pretty, but I never want it to be too pretty. I like that edge to it.”

Clé de Peau Beauté’s Tomoko Yamagishi was already eyeing Adelman’s art piece. “I’m a big fan. I’m actually really happy to see it in person. I wish I could have a piece of her work. She’s brilliant,” she said of Adelman’s work; the beauty brand was an event sponsor. “Our whole point of the brand is radiance and light. Especially with tonight’s honoree, it’s all of that,” she added.

At dinner, guests were greeted with tiny sprigs of lavender tucked into their napkins; Maria Giulia Maramotti recalled the lavender of her native Italy as she took her place next to Shari Siadat Loeffler. Other guests included a mix of artists, actresses, scholars and entrepreneurs — Zoe Buckman, Sebastian Errazuriz, Christina Ricci and Alexandra Chemla.

“I really appreciate the intersection between interior design, architecture, also various textiles and senses, sound,” said Loeffler, who became involved with the museum over two years ago. “I think the way the world is going, it’s a lot about cross-pollination, of creativity emerging — and I think this museum actually celebrates that. And in some ways, it could be the future.”