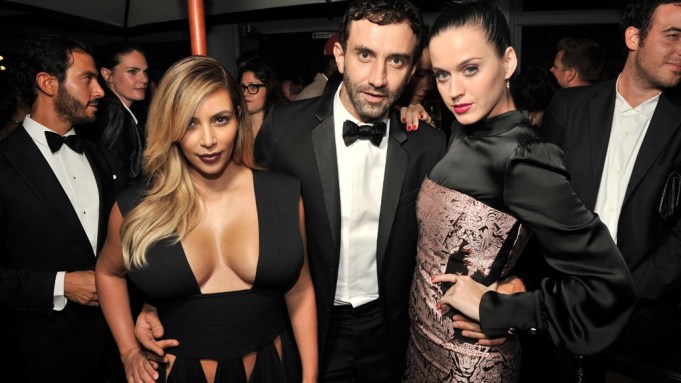 It was all about babies at a party thrown by Carine Roitfeld in Paris Tuesday night, following the premiere in France of “Mademoiselle C,” the documentary about her. Karl Lagerfeld, Kim Kardashian and Kate Upton attended the screening that the former French Vogue editor in chief and CR Fashion Book founder dedicated to her newborn granddaughter Romy.

Kardashian, sporting a Givenchy gown, said she was looking forward to seeing her three-month-old daughter North West. “It was hard to leave her,” she told WWD on the Pavillon Ledoyen’s outdoor patio. The reality star is on the cover of CR Fashion Book’s new issue.

Riccardo Tisci and Ciara were also enjoying the warm night.

“I am definitely looking forward to that part of my life [of being a mother],” said Ciara. “It is all about everything happening at the perfect time.” She said she was flying back to New York on Wednesday and then to Los Angeles to shoot the video for her new single “Overdose.” Meanwhile, Rita Ora and Cara Delevingne rocked the dance floor. Upton, wearing Chanel, shared her enthusiasm about acting. The model is in Nick Cassavetes’ “The Other Woman,” starring Cameron Diaz, and slated for release in 2014.

“I look up to Cameron Diaz. I had the dream cast and crew for my first film,” she said, adding that in it, “I am one of the girls the main character is sleeping with and I don’t know that he’s cheating on me. It is very tough, but it is very funny, too.”