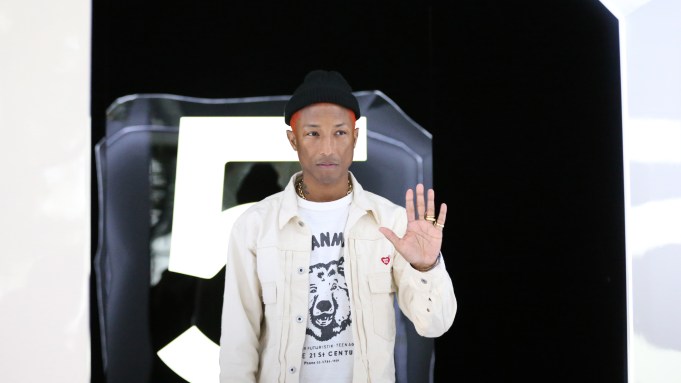 HONG KONG — Good things come in threes, they say. After debuts in London and Seoul, Chanel’s Mademoiselle Prive exhibition arrived in Hong Kong Thursday feted with a party featuring Pharrell Williams, where the theme of the night, undeniably, was strong women. And it wasn’t just Gabrielle Chanel that they were talking about.

Chanel fashion president Bruno Pavlovsky jetted into town for the event, alongside appearances by famous daughters Kaia Gerber and Leah Dou — the only child of Chinese music royalty Faye Wong and Dou Wei with a budding recording career of her own; actress Alma Jodorowsky; Chanel executive and socialite Claudia Shaw, and singers Joey Yung and Khalil Fong.

The exhibition, open until Feb. 10, was spread across two floors of the PMQ complex. Guests entered the courtyard which had been set up like a garden and filled with artworks, before passing through a Chanel No. 5-themed room.

“It was like going to a lab experiment room,” said Taiwanese actress Ann Hsu, who had a recent turn in TV sitcom “Fresh Off the Boat.” “You could interact with it and smell all the base notes they use to create the fragrance.”

Upstairs, instead of the glass encasement treatment exhibitions so often get, haute couture pieces were entrenched in a maze of thick curtains. The narrow passageways had just enough room for three or four people to go by at a time, and the sounds of the quick revs of a sewing machine playing in the background recreated the soundtrack of an intimate atelier.

That gave way to another installation of dresses, held up against bright lights to illuminate the finer fabric details, and a selection of jewels. It was there, surrounded fittingly by black dresses, and from a fashion house built by a woman no less, that Pharrell Williams discussed the #TimesUp black red carpet movement, which had just taken place a few days before at the Golden Globes.

“The past six to eight months, I feel like is what I learned maybe four to five years ago,” Williams said ahead of his performance. “Which is as the eras change so does what is accepted by society changes. You know what I’m saying? There were men and women that accepted a standard. Men and women who had an expectation of what you could and could not do or say. That changes, and that’s been wrong all along.”

The astute will remember that it was in 2013 when the singer’s much maligned music video with Robin Thicke and T.I., “Blurred Lines,” featuring a singularly unclothed Emily Ratajkowski came out.

“How long have women been able to vote? Or what about this pay gap. Still, right now,” Williams continued. “There are people who run companies [who] love their wives, or love their husbands, or love their partners. Whatever their gender is, running a company and yet still, they allow females to get paid 30 percent less than a man. That’s not fair.

“Just like Chanel,” the musician said referring to the designer herself. “Women who refused to see the walls or the ceilings or the boundaries — we need more of that. Nobody is perfect, you’re not perfect, I’m not perfect, [but] the minute you become enlightened it’s your responsibility to share that shine.”

Williams also addressed a growing question — with so many creative greats recently falling from grace — if people should or can separate the person from the art? For instance, what to do in the case of a catchy beat or tune paired with misogynistic lyrics.

“When I’m listening to other people, oh I just listen,” Williams said. “We all got free will and you gotta allow people to do what they’re feeling. If it doesn’t make sense to you, if you don’t subscribe to it, then you literally don’t subscribe to it. But as a purveyor of different sounds and textures, I have to be open to hearing things I may not necessarily agree with just because it exists. Innovation does not always come to those who are wired for positivity.”

Would “Blurred Lines” have a place in today’s world?

“No way,” Williams said emphatically. “That was the beginning, and one of the things that opened my eyes. And while it felt justified because it was a female director and it was her idea, it still just settled me a certain kind of way.”

He said, “[It made me think] ‘You know, you’re right.’ This is, lyrically, some of the things that was said, the things my brother was saying, too. I don’t think I would’ve said it that way, but I wasn’t going to tell him at the time, what to or what not to say. I understood it. I understand that while the intentions of the song were one thing, the way that some women could have felt based off of her past experiences or someone she’s known or an inherent fear. I saw, I understood it.”

Later on stage at Shaw Studios, where guests had been shuttled to for the Chanel after party, the topic was evidently still at the forefront of his mind.

His protégé, Mette Towley, the featured dancer whose locks were shorn in the “Lemon” music video by N.E.R.D. and Rihanna, owned the stage in a solo performance — twisting and twerking with explosive power. It couldn’t have been more different to the passive prancing from the girls in the “Blurred Lines” video.

In the short length of time Towley has risen to the spotlight, she’s already been vocal about her views on race and social justice.

A few songs later, Williams held up and linked his hands together, mimicking the Chanel logo’s interlocked C’s, asking the crowd to do the same. Then, at one point, as guests clamored to the stage to take photos with him, Williams tipped the Champagne bottle he was grasping in a subtle nod to someone. Standing on the far side of the room, his wife Helen Lasichanh.