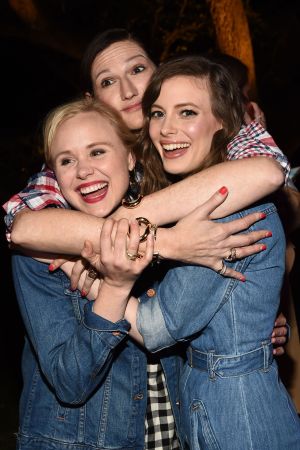 With its country-meets-boho vibe, Austin, Tex., is a natural place for Madewell to host a style-minded get-together. So the brand’s new head of design, Joyce Lee, who is a major fan of the city but had never been to South by Southwest, did just that on Saturday night. The guest list, and the setting, was apt: actors, directors, models and media gathered around tables set outside on the grounds of the charming Southern-style Hotel St. Cecilia, with jean jackets on the seats, antique rugs underneath and chandeliers hanging from a massive oak tree above.

J. Crew president and creative director Jenna Lyons embraced actors Alison Pill and Gillian Jacobs upon their arrival, as guests queued to get jean jackets embroidered by “Nomadic chainstitchers” Ft. Lonesome. Pill was in town for the first time for her short film “Woman in Deep” directed by Janicza Bravo, about a woman who is put on hold after calling a suicide hotline. “It’s a black, dark as night, comedy,” she said, that allowed her to just go “crazy and intense.” (It also allowed her to dress as a Thirties-era WASP.)

Fledgling actress Brooklyn Decker was happy to have an event in her hometown, where she lives with husband Andy Roddick and baby boy, Hank. Dinner conversation topics ranged from dating preferences to nursing — her son is only five months old. “I would love nothing more than watching films all day,” she said, “but my boobs would be as hard as rocks.”

Actress Beau Garrett drove to Austin on a whim, and, as is often the case, met someone from another world — Jon Rose of Waves for Water.

After a family-style dinner, Lyons encouraged the crowd, which also included Jaime King, Lily Rabe and Addison Timlin, to have dessert while dancing to the band King, which performed in the open-air courtyard space.