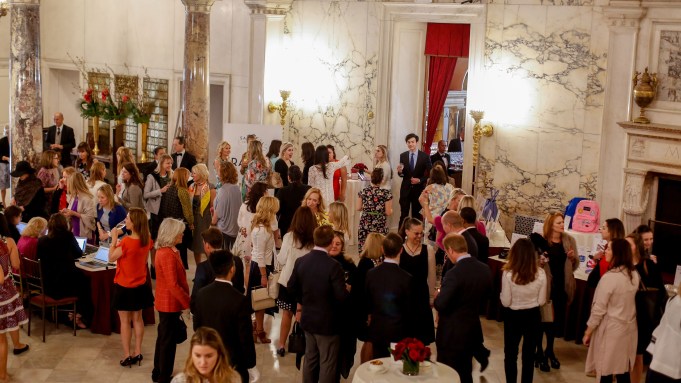 Throngs of elegant New York ladies poured into the marble-covered lobby of the Metropolitan Club Tuesday afternoon for the Madison Square Boys & Girls Club 12th Annual Salute to Style luncheon. “This feels like somewhat of a homecoming for me,” explained shoe designer Vanessa Noel, who was among the afternoon’s honorees. “I lived here at The Metropolitan Club [in their hotel rooms] for a year when my town house was being renovated almost a decade ago. I felt like Eloise at the Plaza.

“It was fun to come home and crash weddings or parties,” she added with a mischievous smile.

In her acceptance speech during the program, which was held in the club’s ornately decorated ballroom facing Fifth Avenue, Noel revealed her plans to open the nation’s first permanent shoe museum and invited youth from the local Boys & Girls Club to be among the first to tour. The designer, who also owns a boutique hotel on Nantucket, has kept her plans for a nonprofit museum under wraps for three years.

Noel and her collaborators are searching for an initial 20,000-square-foot home for the collection in Manhattan, which is about half the size of her goal in terms of space. “The City loves the idea,” noted Noel. “You can follow culture and the history of man as seen through footwear and the materials used.”

Given her strong place within the industry, Noel is having no problem sourcing important pieces for the collection. “Amy Winehouse’s father is promising me all of [the singer’s] shoes that they have still collected. There are sneakers she designed. [Usain] Bolt from Jamaica has promised me his gold sneakers that he won at the Olympics [in 2016].”

The Cornell alumni also hopes the museum will be an education outpost with talks from industry executives and designers ranging from Manolo Blahnik to Sarah Jessica Parker.

A silent auction of designer handbags, jewelry and clothing was on offer for the event, which raised nearly $100,000 for the youth organization. “It started out as a small, intimate event and now there are so many more handbags to buy. I used to get away with buying one but I think once I left with five,” said Nicole Miller with a laugh.

The glamour of the afternoon was overshadowed only by the philanthropic spirit of the organization’s mission to help challenged youth of New York City. Addressing the crowd with an eloquent speech detailing her success in the Boys & Girls Club’s various programs, 19-year-old college student Chassidy David noted how her life was impacted.

“The clubhouse has given me innumerable opportunities to grow as an artist and humanitarian,” she said to the emotional room. “But the most important thing the club has gifted me with is the satisfaction of being a kid and having a childhood that I can look back on and smile about.”