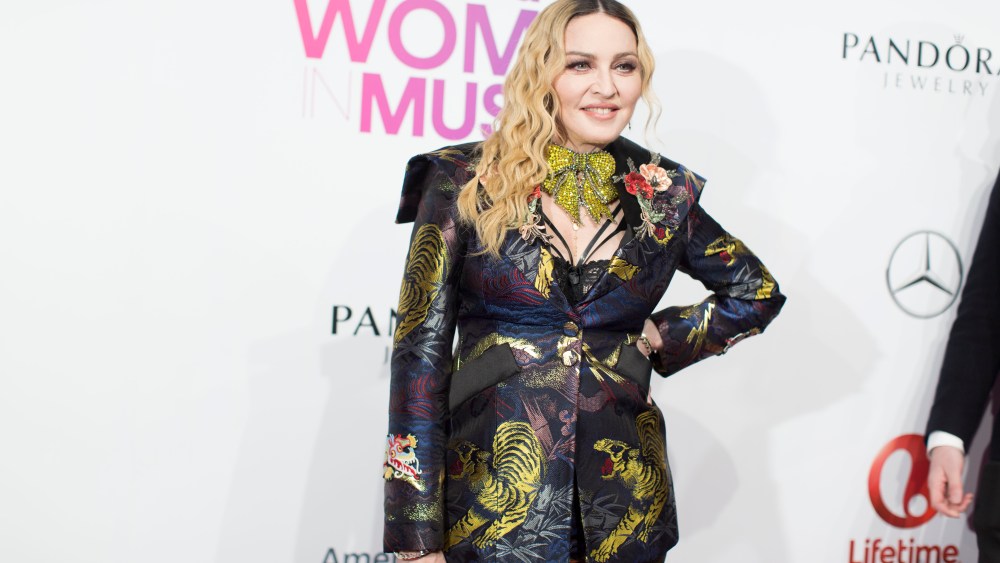 The unofficial woman of every year now has Billboard’s official title to match. Madonna was honored at the publication’s Women in Music event on Friday afternoon with the Woman of the Year award. There to support the 58-year-old music and style icon were Anderson Cooper, Debi Mazar, Labrinth and Rita Ora, among others.

“‘Like a Prayer,’” said Labrinth, suited in Louis Vuitton, of his favorite Madonna memory. “I remember seeing the video when I was a kid and I was, like, ‘What the hell is this? I need to make something like this when I get older.’ It’s a bit wild that I’m getting called and asked to perform here tonight by her.”

Mazar was overheard speaking of her longtime friend. She blanked on the name of her favorite Madonna album, clarifying that she’s a friend, not a fan. Despite having appeared in the videos for “Papa Don’t Preach,” “True Blue,” “Justify My Love,” “Deeper and Deeper” and “Music,” Mazar named hit song “Vogue” as one of her favorite songs.

Rita Ora reduced her voice to a whisper on the carpet as the festivities began nearby. “I am here to tribute the one, the only Madonna, who I adore with all my heart and soul,” she said. “I’m here to support just women being themselves.”

Wearing Temperley London, Ora said she was glad to be at the Women in Music event because it honors the teams behind major artists. “I think people tend to forget that when they see a face on a TV that there’s a village behind that face,” she said. “I think that’s why this award is so great because it honors managers and publishers and people who really help make everything work. That’s what counts.” Ora will make her hosting debut on Monday with the premiere of “America’s Next Top Model.”

Shania Twain was dubbed Icon by Billboard this year and wore a custom Brandon Maxwell gown for the occasion. It’s been 14 years since she last released an album, but fans won’t have to wait much longer for new music.

“I went back on the stage a couple of years ago in Vegas and that really catapulted me over a hurdle that was there for so long — self-doubt, all of that,” Twain said. “And once that started rolling I started to build enough confidence to get back into writing music. Writing the music is the most vulnerable part of what I do because I feel that it’s studied so much and there’s a lot of expectations and I’m an independent writer. I’m writing it all by myself so if people don’t like it, then they just don’t like it and it’s all on me. So it took a lot of courage to go there, but it’s times like this when I feel the support and the admiration and the whole community spirit of that and that empowers me. I feel ready.”

Billboard’s Women in Music airs on Monday on Lifetime.