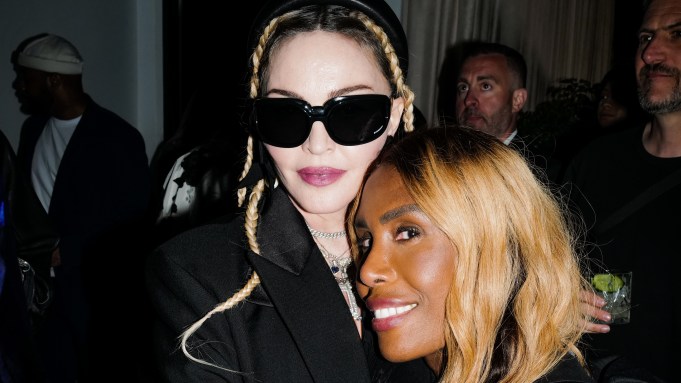 “Burberry knows how to throw a party,” declared Lori Harvey.

Kicking off at 9 p.m. on Wednesday, the late-night bash was held at a private residence on Marmont Lane in Los Angeles, nestled on the side of Chateau Marmont. The hotel was in plain view, projected top-to-bottom with Burberry’s signature check pattern.

“Just even driving up, I saw the Burberry [design] on the building before I got close, and I was, like, ‘Wow, OK!’” she went on.

Inside, it was a who’s who of celebrity faces — mingling, smoking, drinking martinis.

There was Leonardo DiCaprio, chatting with longtime collaborator and filmmaker Baz Luhrmann, director of “The Great Gatsby” and “Romeo + Juliet.” In another corner, Robert Pattinson and Timothée Chalamet, with models Stella Maxwell and Irina Shayk nearby. DiCaprio, Pattinson and Chalamet had on the same uniform — casual looks, caps and sneakers — all refusing to be photographed.

Happy to pose for the flashes, however, was Madonna. She arrived moments after her daughter, Lourdes Leon, as the DJ played “She’s Not Me” from the pop icon’s 2008 “Hard Candy” release. The two, matching in black leather, wore Burberry’s quilted lambskin handbag, Lola — the star of the party.

“Where’s the bag? Show us the bag,” party photographer Tyrell Hampton demanded of model Salem Mitchell and Sydney Carlson of Wildflower Cases, before snapping away as the duo held up their Lola purses.

The event was held to celebrate the leather accessory, which Riccardo Tisci introduced in fall 2019, with the Thomas Burberry monogram, as the “youthful [and] rebellious, unstructured little sister of the elegant TB bag.” Everyone had on a version of the Lola, offered in 17 colors, with options like lime green, deep saffron, sky blue and soft violet.

Harvey opted for the $2,090 black version with metal hardware detailing.

“I’m wearing head-to-toe Burberry of course,” said the 25-year-old model and founder of beauty brand Skn by LH. She’s the adoptive daughter of comedian Steve Harvey, garnering attention for her style influence (and headline-making relationship with actor Michael B. Jordan).

“This is from their new collection,” she continued. “They’ll send me a couple different looks, and I’ll pick. When I saw this, I immediately knew, like, ‘This is the one.’ I love a tailored pant, corset moment. Definitely my style.”

It was midnight when the music artist grabbed the mic to sing, sharing she and Tisci had met through mutual friends.

“I’m just up here trying to…god d–n, you know what I mean?” she said, to laughs. The audience was hers, hanging on to her every word.

“I have something really special for Riccardo right now,” she added, before belting her 2010 hit, “Window Seat.” “If you look good in this mother f—er, somebody scream.”

The crowd obliged, phones up, capturing the moment.