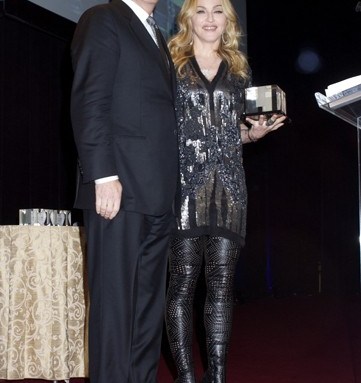 Neil Cole made jaws drop throughout the Grand Ballroom of the Waldorf-Astoria when Madonna stepped out from behind a velvet curtain to present him with an award at the Fashion Delivers gala Wednesday night.

The megastar, whose appearance was kept secret from most of the 1,000 guests, made quite an impact in her thigh-high perforated Stella McCartney boots and glittery silver tunic dress. With guests racing to snap photos with their iPhones, Madonna took to the mic to credit Cole, the chairman and chief executive of Iconix Brand Group, Inc., for his charitable endeavors.

“I’ve only recently started working with Neil,” Madonna said, calling him her “new partner in the fashion world, but I already know that he’s a man that makes things happen.” She cited his “work ethic,” which she called “astounding, but his heart is in the world of philanthropy.” Nine years ago, she related, Cole founded Candie’s Foundation to combat teen pregnancy. And since the two started working together on a joint venture for the production of Madonna’s apparel, footwear and other products, he has thrown his support to her charity, Raising Malawi. With Cole’s help, she said, that organization will now be able to finish building a girls’ academy in the African country.

Cole pointed to Madonna’s philanthropic side during his acceptance speech, saying her celebrity status tends to overshadow the work she does for others.

Turning to Fashion Delivers, he said it took him three years to decide to accept the group’s request to be an honoree because he knew he’d have to ask his apparel and retail partners for money. But when he found out that the group had arranged to ship nearly $40 million in new apparel and home products to Haiti, he agreed.

Ullman, who is preparing for the all-important holiday season, said: “We planned inventory based on what we think sales are going to be. They were good for back-to-school and Father’s Day. I think we’ll have a good holiday. Customers are more aspirational this year. Last year was more about basics. I feel good about our gift-giving assortment this year. The economy is slowly turning around.”

In addition to Cole, the evening also honored Hilfiger and Liz Sweney, co-chief merchant of Penney’s, with the Fashion Has a Heart Award for their charitable activities. Ullman singled out Sweney’s work with the United Way, the J.C. Penney Afterschool program, the Children’s Hospital in Texas and an abused women’s shelter as a “fitting” reason for her to be honored. Sweney said that while “change is the very essence of fashion, there’s one thing that doesn’t change — bringing health and hope to those who need it most.”

In presenting the award to Hilfiger, Lundgren related that their daughters went to school together and Hilfiger never missed a play or sporting event. One day when his daughter was playing a flower in the school play, Lundgren couldn’t get out of a board meeting to see her perform. When she got home, she shook a finger at him, saying: “Mr. Hilfiger was there.” Lundgren laughed that it took her eight years to forgive him.

The friendly ribbing between the two continues to this day. Hilfiger said that when he e-mailed Lundgren before the dinner to tell him he’d be 10 minutes late, Lundgren responded: “It’s tonight?” Hilfger said: “So I’m grateful that you actually showed up.”

The sellout event raised $1.4 million for the organization, which “shattered all previous events,” according to founder Allan Ellinger. Another $170,000 was raised by a lively Text to Pledge campaign, hosted by Sims and former JA Apparel Corp. chief Marty Staff. One guest texted that he’d donate $500 if Sims would pucker up for a kiss. She said if the number was $5,000 she’d kiss the texter on the lips. No dice.

“Unfortunately, no one wanted to kiss me,” Staff said when he got back to his table. “I would have done it for free.”