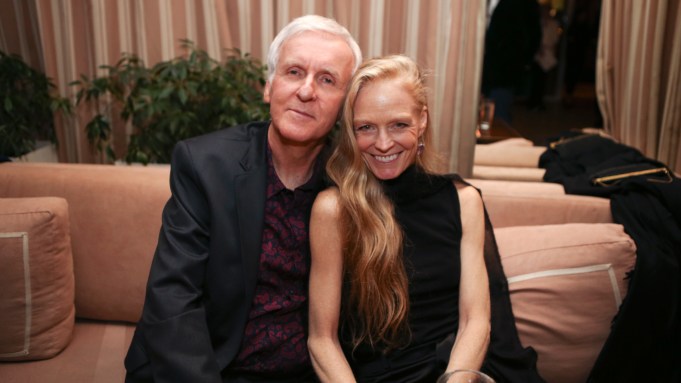 “Before it used to be hemp cloth, which was really cheap and didn’t look great,” said Rosario Dawson of the sartorial quality of ethical fashion in years past. “This generation gets the benefit of having more quality and not having to sacrifice the artistic capability. It’s exciting to be a part of that conversation.”

The actress, who arrived at the Terrace at The Sunset Tower for Maison-de-mode.com’s first annual gala, wore a flowing Vivienne Westwood gown made of sustainable silk. Her look, along with those of Madelaine Petsch, Angela Bassett and Maye Musk, were slated to be donated to the luxury e-tailer to benefit the environmentally focused Muse School, cofounded by the evening’s honoree Suzy Amis Cameron and her sister Rebecca Amis.

Hearst, a cousin of Maison de Mode cofounder Amanda Hearst, gushed, “I was already curious, but I didn’t know where to get [sustainable fashion] or that much about it at all. When she started doing the company with Hassan [Pierre], she and I were having lunch one day and I started asking her questions about who made her outfit and where was it from. That’s when she started telling me about how the products were made without the use of chemicals, testing or harming animals. Basically, everything they carry I wear.”

Nearby, Bassett — who struck the “Wakanda Forever” pose with a few “Black Panther” fans — and her stylist Jennifer Austin went over her game plan for the 90th Academy Awards. “I’ll be attending the Vanity Fair party,” she said, adding that she was hoping for a “Get Out” win. “I’m rooting for Jordan Peele; it’s great that he has a voice to talk about racism in this climate.”

Dawson, who’s opting to watch the ceremony at home this year, noted, “I have been going to the parties for many years, so I’m going to watch it with my daughter, which I’m really excited about.” The actress is also prepping for her short film directorial debut. “I’m going to be sitting with Zoë Bell and we’re going to watch Ron Howard’s “Master Class” afterward. I’m always super fired-up after these events. I’m just so excited about this moment so I’m taking notes and taking names.”

Before the three-course dinner, Amis Cameron accepted her honor. “I never felt that there was something I as an individual could do to make the world a better place and then, I had two ah-ha moments. The first one was [the initiative] Red Carpet Green Dress and then the second was becoming plant-based. The largest contributors to green house gases and climate change are fossil fuels, all transportation combined, and animal agriculture. One person can make a difference by wearing more sustainable clothes and by eating plant-based foods once a day,” she said.

Before taking her seat, she sent the crowd into laughter saying, “If you really want to have fun and keep this going you can have a super yummy plant-based meal at home naked.”