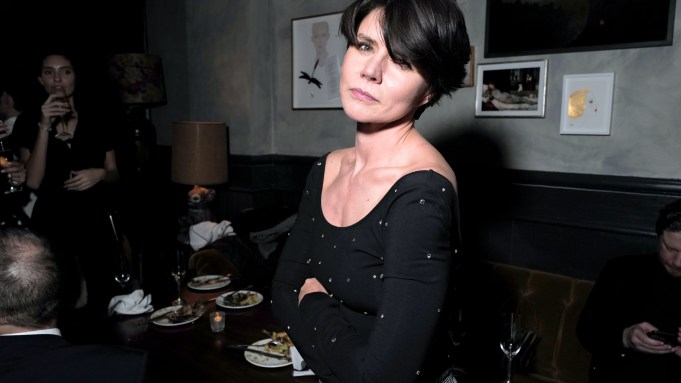 “Nightwalk,” directed by Malgorzata Szumowska, is the 19th film to come from the initiative, which has in the past featured directors Ava DuVernay, Miranda July, Agnès Varda, Crystal Moselle, Chloë Sevigny, Dakota Fanning and Lynne Ramsay. Alumnae of the project and other guests — many were dressed in Miu Miu — snacked on Miu Miu-branded cups of popcorn and candies inside the landmarked Village East Cinema as they waited for the screening to begin. Afterward, Hailey Gates moderated a conversation with Szumowska and the film’s stars Raffey Cassidy and Filip Rutkowski.

The film, which is absent of any dialogue, explores concepts of being misunderstood by family and the interplay of clothing and gender identity. The film’s two leads walk through the streets of Poland toward each other and have swapped outfits by the time they meet.

“Filip was my inspiration, because he works in the art world, he’s a performer, but he’s very unique; he’s very often dressing like a woman on the Polish streets of Warsaw,” said Szumowska of the film’s genesis. Szumowska met Rutkowski through mutual friends in the art scene of Warsaw, and “Nightwalk” represents their second time working together cinematically. “I think it’s very brave, because Poland’s a conservative country.”

The story is also set among the political backdrop of being LGBTQ in Poland. Last year, several municipalities in the country moved to create LGBTQ-free zones.

“On one hand, we have this very conservative central government in Warsaw that is creating LGBTQ-free zones and trying to convince people that queer culture is something that is coming from the West and Polish people cannot be gay,” said Rutkowski, wearing the custom pair of Miu Miu heels that the brand created for him. “And then there is Warsaw, the only place in Poland that has the minimum laws for LGBTQ people support,” he added.  “And that’s why I think walking down the streets in high heels when you’re gender queer is important in Poland, to show that you have the confidence and courage to go through the space, that you can relate to the space of the street.”

Szumowska recruited Raffey for the Miu Miu Tales project after working with her on “The Other Lamb,” the director’s first English language film which premiere at the Toronto Film Festival last year. Filming on location in Warsaw for “Nightwalk” was Cassidy’s first time visiting Poland, but likely not her last.

“Raffey’s going to come back to Warsaw and we’re going to make a drag show together,” Rutkowski said.

“I said, ‘you have to wait for me and we’ll do it together,'” Cassidy said.

After the screening, the crowd piled into a fleet of black sprinter vans for the short trip downtown to the afterparty at Ludlow House.

On the second floor of the member’s club, Szumowska settled into one of the side banquettes after grabbing a plate from the family-style dinner buffet.

After approaching her about participating in the project, Miu Miu invited the director to attend the brand’s runway show in Paris.

“It’s like a performance huge, a piece of theater. I was a little bit like, ‘wow,'” said Szumowska; it was her first runway show. “And then I saw all the clothes and I thought they were really beautiful with the music. Then I figured out that the clothes are important in the movie, and I decided to blow them away. Like OK, they are important, but on the other hand they are a material, too. And I said OK, let’s use them, but pull them out.”

Although the costumes inspired the script, Szumowska adds there was no pressure to use Miuccia Prada’s designs. (Although it’s certainly a good look to do so, given that Miu Miu is underwriting the project.)

“You are totally free, Miuccia doesn’t force you to do anything. She is just giving you total freedom, you can do whatever you want,” she said. “You are not obliged to use the clothes. I was just invited to see the show and I said to myself, ‘it might be interesting to see those beautiful clothes floating in the air.'”