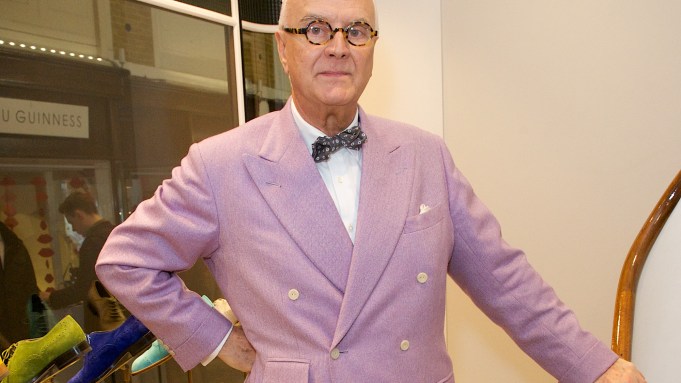 PARTY FEET: Manolo Blahnik opened the doors of his second London boutique, at the Burlington Arcade, on Tuesday evening.

“It took 28 years to find the right location,” said the footwear designer, who donned a lilac suit with his signature bow tie for the occasion.

Unwilling to settle for a more commercial location like Bond Street, Blahnik said he opted to wait until securing the right spot linked to history and tradition.

“Can you imagine the history of this place? Cavendish House, which is the Royal Academy now, is right next door. So we are happy as hell,” said the designer. “All my books and fantasies have always been centered around the area and the Burlington Arcade — women stepping out to quickly look at the Burlington Arcade or going to see their boyfriends at the Albany, having tea at Fortnum & Mason’s and going to Hatchards to get books.”

“We are used to doing things by hand and so do the people at Church’s or Penhaligon’s, a company which I love because it’s quintessentially English. It’s great to have those people as neighbors,” said Blahnik.

Apart from the store opening, Blahnik is also in the process of filming a documentary and planning an exhibition of his work, which will travel from Venice to Prague and Moscow.

“I’m not excited for all the hullabaloo, but here we are. Before I get too old, let’s enjoy five seconds,” he said.

Kristina Blahnik, the designer’s niece and chief executive officer of his company, was also in attendance. She was quick to point out that this was a passion project rather than part of a business strategy.

“Everything will happen organically. There is no business plan to open five stores in the next six months, there is no interest in that,” she said. “We’re about finding a place, settling it and seeing how it goes, letting the shoes settle into their clients — and it’s about that. There’s no aggressive tact.”

Other guests included Yasmin Le Bon, Nicholas Kirkwood and Lady Kinvara Balfour, who was filming scenes of the store opening on her phone for Blahnik’s documentary.

“There is such perfection in Manolo’s work. He was one of the reasons I wanted to start designing shoes to begin with,” said Kirkwood.

A few streets away, at Annabel’s members’ club in Mayfair, French Sole and Alice Naylor-Leyland celebrated their collaboration.

“When I was approached by French Sole, I thought they were offering me to customize something for myself. It’s slightly terrifying that this is for everyone,” said Leyland. “I just had to do an ‘Alice in Wonderland’ theme. It’s fun and whimsical, which is how a collaboration should be.”

“[The collection] is feminine. There’s leopard print and glitter. What’s not to love?” she asked.

For her part, Le Bon embraced the “Alice in Wonderland” theme by sporting a new pink hair color, dyed during a recent shoot for Redken, the L’Oréal-owned brand for which she is an ambassador.