Fashion folks party hopped all over Miami over the weekend. 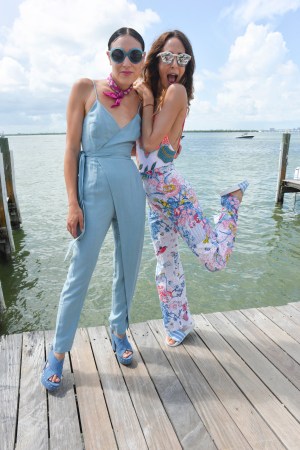 With IMG’s departure from Miami Swim Week, many brands got into the spirit through the party circuit instead.

“Slipdresses are back in a big way,” she said.

“I normally wouldn’t go out in public like this,” said Mark, of her black one-piece swimsuit and sheer cover-up combo. “But now I’m totally obsessed and wondering how to wear it everywhere. Do you think it would work in Montauk?”

Mara Hoffman happily skipped her annual fashion presentation to greet guests like Thaddeus O’Neil and Caroline Vreeland at the Standard Spa’s Lazy Sunday BBQ. Simultaneously, the Webster celebrated the local launch for Stella McCartney’s expansion into swim and sunglasses. Hannah Bronfman and Harley Viera-Newton were among those in the crowd to check out sunny citrus-printed and leopard-spotted suits on the store’s rooftop.

Matchesfashion.com traded one island locale for another with a humidity-drenched candlelit dinner the night before at Mandolin Aegean Bistro as an overdue gesture to spoil its resortwear designers. Emerging and established brands including Figue’s Stephanie von Watzdorf, Kiini’s Ipek Irgit, Thorsun’s George Sotelo, Loup Charmant’s Kee Edwards, fresh from opening her first freestanding boutique in Brooklyn Heights, and Hoffman set aside their hectic show schedules to break bread (and scoop up tzatziki and baba ghanoush).

“Our ‘vacation studio’ business has been so strong but sometimes gets forgotten in the hysteria of ready-to-wear, bags and shoes,” said buying director Natalie Kingham, of the decision to fly in a handful of the team for the inaugural Miami event. “We wanted the designers to enjoy the moment, and I think they all enjoyed meeting each other and admire each other’s work.”