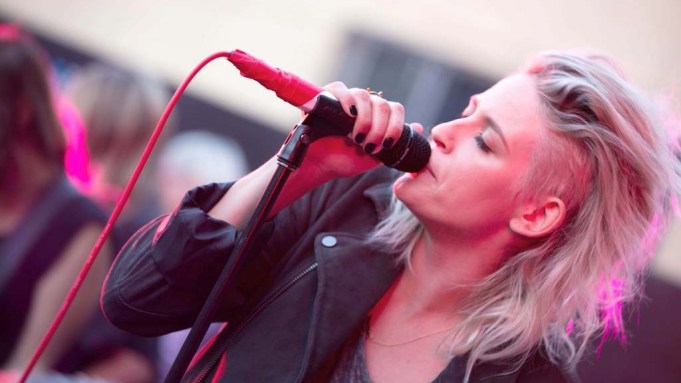 Despite balmy temperatures, scenesters overdressed in Los Angeles Friday night for an outdoor fete to preview the Marc by Marc Jacobs fall collection. Emily Armstrong arrived in nearly head-to-toe wares from the designer — save a vintage hat — but changed before playing a half-hour set with her band, Dead Sara. “You’re performing the same songs every night. It’s the fashion that gives it something new, that confidence,” the platinum-tressed front woman explained, opting to swap her knee-length sweater for an even more weather inappropriate black motorcycle jacket for the performance. “It’s kind of fun to just start sweating in the first couple songs. It feels good in a gross-but-good way. It’s like, ‘Uh — I’m feeling it,’” she said.

“Fashion and music seem to go hand and hand,” agreed Robert Duffy, Marc Jacobs International president, who met Dead Sara through a mutual friend, photographer Brian Bowen Smith. “We know a lot of artists that wear our clothes, and we are inspired by their music. Many collections over the years have been inspired to some degree or another by a song. Marc [Jacobs] is probably the most knowledgeable person I know when it comes to music of all kinds.”

“This is an interesting setting for a rock band,” noted Brandon Boyd of the stage setup in the courtyard behind the Marc by Marc Jacobs store in West Hollywood. “I’m curious to see how this will go over, but if I know them at all, they’re just going to rock,” predicted the Incubus front man.

And rock they did for an appreciative crowd that included Natasha Bedingfield, Zoey Deutch and “newly separated” Michelle Branch, who canoodled with Chris Null before the show. “I am dating the bass player,” she confirmed between giggles. “I love this band, and I’m so excited that they’re playing this event. I’m so ready for this band to blow up,” said the singer-songwriter, who donned distressed denim cutoffs and Christian Louboutins. Branch, who plans to return to her pop-rock roots after a long hiatus, called Armstrong “ a star” but expressed reservations over collaborating with the quartet, which also includes Siouxsie Medley and Sean Friday (Demi Moore’s paramour). “I’m such a fan and would obviously jump at the opportunity, but that whole boyfriend-girlfriend intermixing.…I’ve watched ‘Fleetwood Mac: Behind the Music,’” Branch said.

Also gushing over a crush: Deutch, who selected a burgundy frock by Jacobs for the soiree. “I’ve been obsessed ever since I was a little girl. I would always go to this tiny little section in Bloomingdale’s at the mall, and I’d always look through all his stuff and freak out,” she reminisced of her fixation with the designer. Back then, she loved to tease her mom, Lea Thompson, over her sartorial choices. “I always make fun of her for shoulder pads and big hair, and I was so wrong,” she admitted.

The actress now styles herself, but she revealed that older sister Madelyn Deutch holds veto power. “I pretty much don’t wear anything unless I ask my sister. I literally could not make a choice without my sister’s opinion,” shared the 19-year-old, who caught up with Brenda Song, her costar on “The Suite Life on Deck.”

Michelle Pesce spun a hip-hop-heavy mix for guests as they snacked on organic mini wagyu sliders, ahi tacos and filo-wrapped shrimp. After one too many rounds of Herradura margaritas and palomas, a party foul was narrowly avoided when a liquor fairy snuck out to buy more tequila.