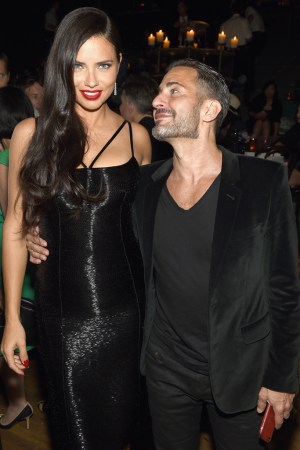 It’s a word that invokes a scene straight out of “The Great Gatsby” — gilded mansions, towers of Champagne, gluttonous buffets and roaring jazz. But not so for Marc Jacobs. For the launch party of his latest fragrance, aptly named “Decadence,” the vibe read more Ringling Brothers than Fitzgerald.

Mystery was the main theme of the night, with even the location being kept under wraps until just moments before the party’s start time on Thursday. And even then, it was something of a red herring — the address given was your run-of-the-mill corner hair salon. But have no fear, stationed outside was the drag queen Milk, of “Rupaul’s Drag Race” fame, all seven feet of her done up in Gothic attire and Lichtenstein-esque face paint, to usher guests into the correct location. It was once inside when numerous bouncers iterated the evening’s vow of secrecy: no social media allowed. The same mandate may not have worked at last month’s Met Gala, but hell if Jacobs wasn’t going to try.

And what a shame. The crowd would have had a ball ‘gramming the venue — a former vaudeville club turned recording studio. There was a giant, globelike fish tank, a cigarette girl handing out treats — which many guests sampled — and a slew of hunky waiters proffering Sidecars and caviar.

Then there was the entertainment. As Jacobs, his long-standing cool girl trifecta (Sofia Coppola, Kim Gordon and Rachel Weinstein) and other guests looked on, a series of acts took the stage, creating something of a deranged variety show. First up was the model Jamie Bochert, cooing a moody rendition of Johnny Mathis’ “Wild is the Wind.” “Decadence,” she whispered into the mic, before hopping off the stage to make room for a portly man playing the musical saw. The unique musical interlude led to a viewing of a clip from Drew Droege’s Chloë Sevigny parody videos, a viral hit circa 2010.

Was this Jacobs’ bizarre version of a #TBT? Maybe — but more importantly, it was an intro for Droege himself, decked out in full Sevigny regalia — blonde wig, embellished dress, lemon pout, et al. “Good evening, America, I’m Chloë Sevigny. Thank you,” Droege began, deadpan. “It’s recently come to my attention that I love Marc Jacobs. I first discovered Marc Jacobs when I was having a basket lunch at Ambroeus. I immediately looked over and saw Kim Gordon, Richard Prince and Cher. I said, ‘Good evening, Kim Gordon. Good evening, Richard Prince. Hey, Cher.’ And seated between them was this gorgeous creature. He was festooned in tattoos, smoking a Marlboro Light, and taking selfies with Grace Coddington.” The crowd lapped it up.

Then, it was time for the grand finale: a magic show performed by Gregory Dubin, with special assistance by Adriana Lima, the face of Decadence, and Jacobs’ social media-famous dog, Neville. The trick: sawing the Victoria’s Secret Angel in half, of course. Lima gamely hopped in the boxed contraption, wiggled her toes, and voila! She was split in two. But no need to alert Ed Razek. In no time, she was back in one, lingerie-ready piece. “I was so nervous,” she confided, post-body reattachment. “I was shaking, really. It was the first time I’ve ever done that.” You don’t say.

Lima surveyed the room before admitting her own day of decadence might play out a bit differently. “My day starts at my house in Miami with my family,” she said. “Sometimes it’s even doing my job, when it’s a shoot like one with Marc Jacobs and Steven Meisel.” She gestured towards the campaign image, magnified on a projector screen, before running off to pose for a few approved photos with Jacobs and Neville.

Huh. But what about that “no social media” policy? By the end of the evening, Jacobs himself had posted no less than 23 images. Very decadent.