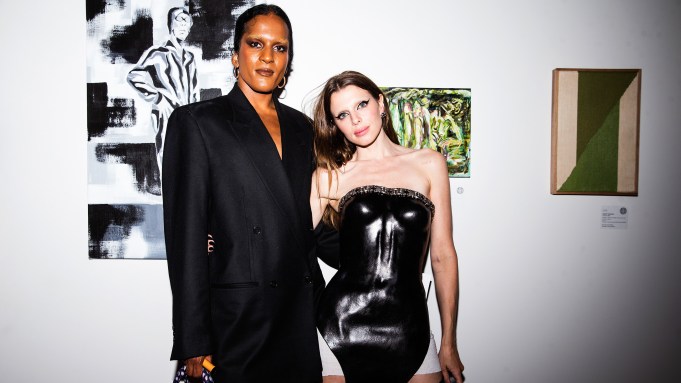 The annual Free Arts benefit made its post-pandemic return Wednesday with an evening in Chelsea that honored the artist Futura and raised $1.2 million.

Futura, a pioneer in the graffiti art space, was presented his award by Marc Jacobs; the pair properly met a few months ago, but Jacobs disclosed that they had in fact had a brief meeting decades back when both were emerging on the New York scene.

“I remember him from really early on, from back in the days of Madonna, and I briefly met him back at the Roxy — so we’re talking about a long, long time ago,” Jacobs said during the cocktail hour inside the Altman Building on 18th Street. “We were in the VIP room at the Roxy with a great mix of people and he was among the mix.”

A few months ago, however, they were properly introduced and after Futura gave Jacobs a studio tour, they attended a workshop with Free Arts, getting to see the young people participating in the nonprofit’s classes.

“Some of the young individuals who were at the workshop are here tonight, and you know, we’re just trying to raise money for them,” Futura, real name Lenny McGurr, said. “So the fact that Marc’s willing to do that — I mean, FreeArts is 25 years old. I graduated high school 50 years ago, and we didn’t have programs like that, obviously. So the whole cliché of wanting to give back to your community, I’ve always had that. I come from the city, and the whole culture is sprung out of kids from New York City writing on walls in the train. To think that it’s here as a global art movement and to be one of the representatives of it is very cool.”

The night, which was supported by Supreme, was attended by Julia Fox, Richie Shazam, Will Cotton, Cynthia Rowley, Vashtie Kola, Rosie Perez and more. In addition to being honored, Futura was announced as the namesake for the Futura for the Future Scholarship Fund.

Markarian Hosts an Early Summer Dinner at L’Avenue at Saks