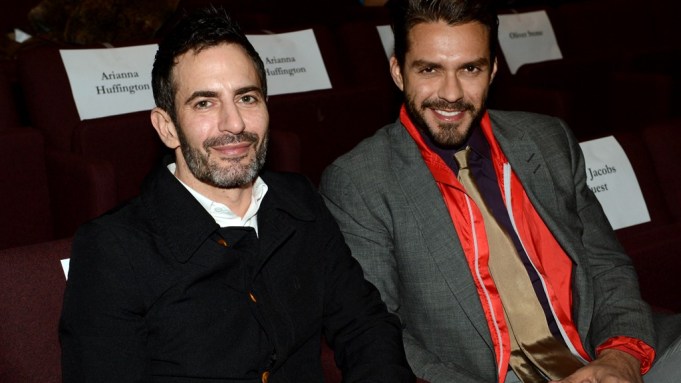 On Thursday night, Marc Jacobs hosted an intimate screening (read: no red carpet, no press line) at MoMA of the new social media-focused thriller “Disconnect,” in which he has a small part. Through a handful of interwoven story lines, the film examines how the influx of social networking has redefined the way in which people find human connection.

Jacobs was one of the first moviegoers to turn up, sinking into his reserved seat alongside longtime on-again-off-again beau Lorenzo Martone. A swell of well-wishing friends including Arianna Huffington, Waris Ahluwalia, Scott Campbell and Yigal Azrouël filed into the theater soon after, stopping by Jacobs’ aisle seat to say hello.

“I don’t know what to say,” Jacobs said after the movie rolled, approaching the front of the auditorium for a Q&A session moderated by Huffington. “I’m shaking.” The film’s director Henry Alex Rubin joined him onstage. “Well this is very unfair to you,” Rubin offered. “You just watched the movie for the first time and now I’m making you talk about it.” Along with Frank Grillo, who also stars in the film, the panel weighed in on the prevalent addiction to social-networking sites and iPhones. Ironically, much of the audience typed away on their various devices throughout the discussion.

“He may have a new career,” Rubin said later, referring to Jacobs’ performance. The designer shook his head firmly. “I was there for the coffee,” Jacobs clarified. The designer also confessed to indulging in the on-set catering. “The macaroni and cheese,” he sighed. “Which I have avoided for about seven years, the starch and carbohydrates.”

He later spoke to WWD about the less agreeable aspects of being on set. “It was a three-day shoot, 12-hour days. The first day was four in the afternoon until nine in the morning. We shot up in Yonkers on the coldest day of the year,” he said. “I had electric heating pads inside my sneakers, my pockets. I had them strapped all around my body. It was insane, insane, insane.”

Afterward, moviegoers migrated to Bobby Vans, a few blocks south, for a late supper of arugula salad, chicken marsala and French fries served family style, which most attendees grabbed fistfuls of with utter abandon. Arden Wohl ducked out after the first course was cleared while Olivier Theyskens entertained a smiley Rebecca Dayan at the next table. Mark Borthwick and Maria Cornejo regaled tablemates of their own experiences with social media overshare. Cornejo recently discovered her daughter had posted a text exchange the two had had on her Facebook page. “I was like, ‘Hey,’” the designer exclaimed. “‘That was a private conversation.’”