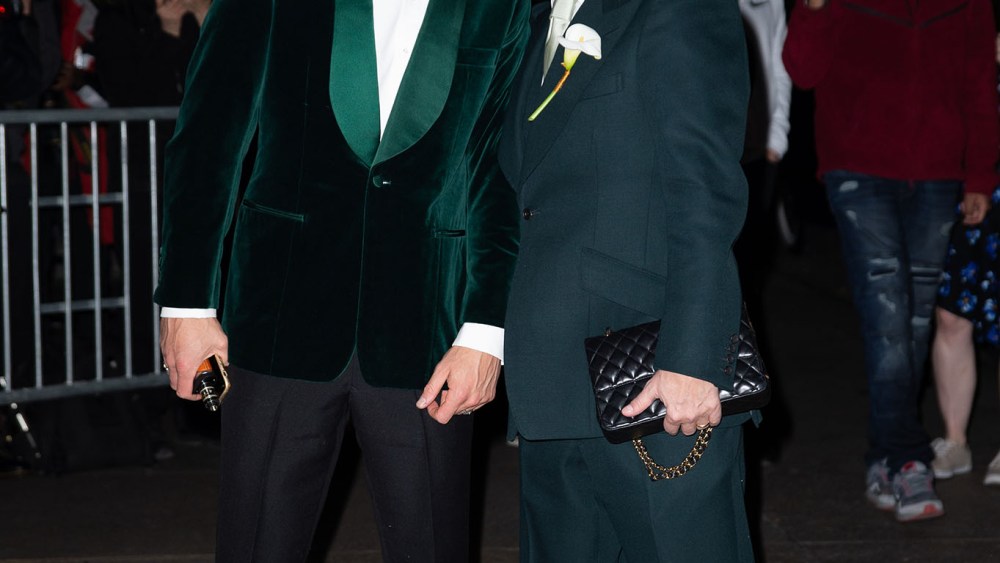 The guests began arriving for Marc Jacobs and Char Defrancesco’s wedding reception at The Pool well before its 9 p.m. start on Saturday night. They just hadn’t been invited.

The paparazzi (“they don’t like that name,” whispered one photographer) jockeyed for position as the security team built metal barricades for crowd control. It added to the intrigue for tourists walking by. “A private event” was all the information needed for them to join the cluster waiting to see who would arrive.

Jacobs — perennially prompt — and Defrancesco were an early arrival, pulling up to the curb on 52nd Street in a gleaming vintage Rolls Royce.

“Being here with our family and celebrating,” offered Jacobs when prompted by the crowd about what he was looking forward to. He and his husband happily obliged requests for photos, posing mid-kiss before descending the stairs. (Inside, the designer offered that he had chosen a pagoda-shouldered suit by Huntsman for the occasion. “It’s very Seventies, Cardin,” he mused.)

“Remember when you used to go out and it was like this, you would see so many people?” remarked Sui. “But that’s a long time ago, and this is the first time in a long time that you had fun getting dressed up, and that you knew you were going to see a lot of people. And it’s in this setting! This setting is the most spectacular in New York.”

Inside, guests greeted the happy couple and shuttled between The Grill and The Pool, two glamorous landmark restaurants, the latter morphing into a disco as the night wore on and the Ruinart and Dom Perignon flowed.

“Thank you to each and every one of you, our family, who have come from near and far, far and wide to celebrate with us tonight,” said Jacobs and Defrancesco during their joint speech inside. “Everyone in this room has played such an important part in our lives, you all mean so much to us. We could not have asked for a greater gift than your presence in celebrating and dancing the night away. So drink, eat, dance, check out the photo booth. Grab a hoodie on your way out.”

Around 10 p.m., the models — super and otherwise — began to stream out of the parade of black SUVs inching down the block and into the venue. There was Jordan Barrett and Kate Moss, Bella Hadid and Gigi Hadid, and one car with a particularly loud bass beat yielded Naomi Campbell.

Debbie Harry, in a Vivienne Westwood brocade jacket and jewel studded Marc Jacobs miniskirt, and Delphine Arnault scoped out seats at the bar, while Campbell and Kaia Gerber roamed the rooms.

“I’ve never been married so I don’t know how to extend advice,” said Rita Ora, asked if she had any advice for the newlyweds. “But knowing them separately, they’re just a match made in heaven, clearly. I’m just so happy for them.”

While most guests were eager to get inside to celebrate as quickly as possible, others were more game to pose — including Mýa, who actually came back at the pleading of the photographers.

Jacobs loves a rapper from the Aughts, but perhaps none more than Lil’ Kim. Just shy of 10:30, she was the final VIP arrival of the night, taking her time before emerging from her Maybach as her own security team lingered curbside. Finally ready to make her entrance, she gamely offered the crowd a smile and wave.

On their way out, guests grabbed their parting gift: a white sweatshirt, embroidered with two otters holding hands above a heart and the inscription “Don’t Float Away.”