Naomi Campbell, Lil' Kim, Sofia Coppola and more surprised Marc Jacobs Saturday night at what he thought was a birthday dinner for his fiancé, Char Defrancesco. 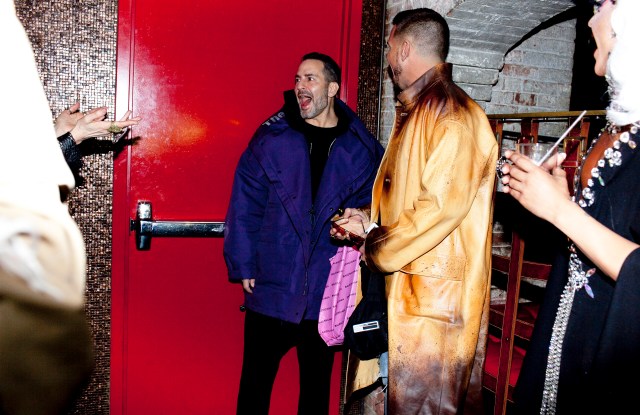 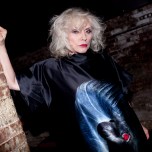 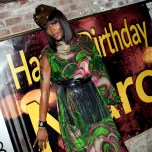 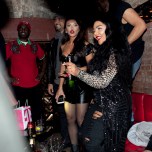 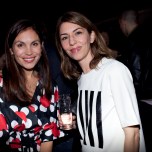 It was, by their own admission, a Shakespearean comedy of errors (the good kind, that is).

Having proposed earlier in the week, Marc Jacobs wanted to throw a surprise birthday dinner for his new fiancé, Char Defrancesco, on Saturday night at The Mercer Hotel. Little did Jacobs know, Defrancesco was hard at work planning a surprise party for the designer all the while (the couple are nearly birthday twins: Defrancesco’s birthday was on April 4, while Jacobs’ is on April 9).

Naomi Campbell, Lil’ Kim, Sofia Coppola, Debbie Harry, Bette Midler, Cindy Sherman, Scott Campbell and more were all gathered into Submercer at 9:30 p.m. when Defrancesco led Jacobs into the club, as the crowd yelled, “Surprise!” Confused by the sight of his own friends and not Defrancesco’s (and convinced he was therefore in the wrong place), Jacobs stood in shock for a few moments, absorbing.

As he processed the surprise, Harry came wheeling out sitting atop a three-tier birthday cake, having changed into a white mini dress, to lead the crowd belting out “Happy Birthday.”

The original plan had been for Harry to emerge from the cake, but “I couldn’t fit inside, it was too small,” she said afterward, sitting on the club’s red leather couch near Midler and Sherman. Getting onto the cake, however, still required some assistance. “Because I’ve got these shoes on,” she said, motioning to the furry black platform booties she was wearing. “They’re like crappy shoes, Eighth Street crappy shoes.”

It was the first time Harry had celebrated Jacobs’ birthday with him, as it was for Sherman.

“I’m not really sure when it was — it was probably in the Nineties,” Sherman said of when she met Jacobs.

She’d missed seeing Harry’s dramatic entrance — “I couldn’t even see” — and was on the hunt for the birthday boy. “I still don’t know where he is,” she said.

After making the rounds and hugging each guest, Jacobs was found near the bar with Coppola and Campbell, egging the supermodel on to dance for the camera to George Michael’s “Freedom” playing overhead.

“OK, that was amazing,” he told her after she finished. “I don’t believe this.”

The shock of the surprise party had still not worn off for Jacobs an hour later. “All week long I have been in cahoots with Charly’s best friend Jason Marks: I was supposed to get Charly here,” Jacobs said. “The premise was I was supposed to get Charly here to the Mercer at 9:30 for a dinner of ten of his friends that he’s not seen in years. So I manipulated with Nick Newbold, who works with me, to take him to the movies to sit through a movie at a certain time so that we could get out at 9:00, so that I could get him here at 9:30 for this secret dinner in his honor, for his birthday. And when we walked in, and I saw Susanne Bartsch and Debbie Harry I was like, ‘I don’t think we’re in the right place, this was supposed to be for him!’ I am in shock.”

The couple had been to see “A Quiet Place.” “I had to take him to something he wanted to see,” Jacobs said. “I mean, I was in a bathroom stall, in a theater in Kips Bay, telling his best friend, ‘We’ll be there in 20 minutes.’ And then in the car I’m texting him, ‘We’re ten minutes away, we’re five minutes away.’ Because I didn’t want him to know that I was taking him here for his birthday.’”

“How amazing is that?” Defrancesco chimed in.

“I was planning his surprise party, which was mine!” Jacobs said.

“It couldn’t have been more like a Shakespearean comedy of errors, so manipulative,” Jacobs said. “I had no idea.”

Checking Into the Hotel Man Repeller