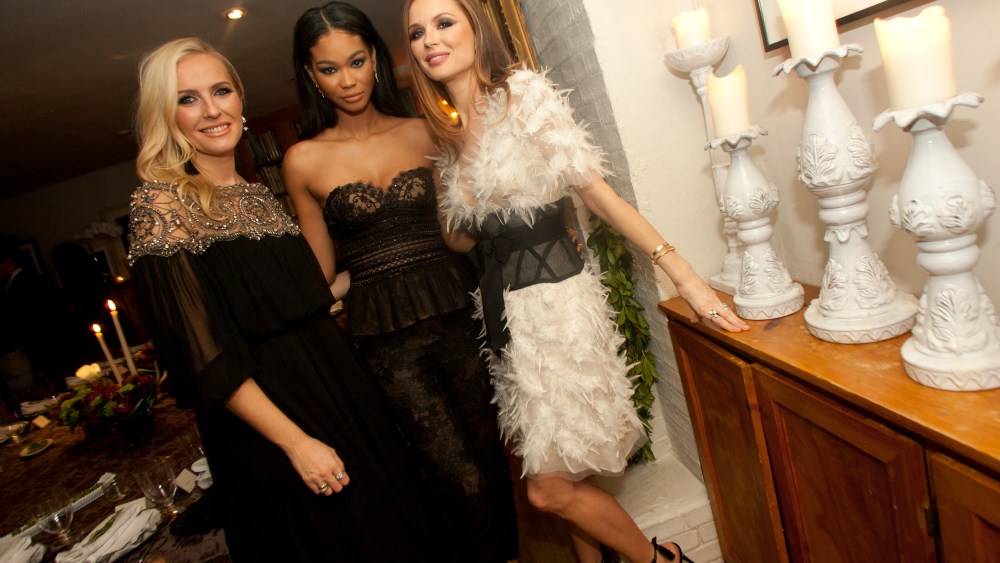 It helps to have Hollywood in your wheelhouse. Such is the case for Georgina Chapman (married to Hollywood heavyweight Harvey Weinstein) and Keren Craig, the designers behind Marchesa who celebrated their debut footwear line at Palma in New York on Monday night. Naomi Watts led the show business brigade, but other behind-the-screen celebrities were also present. Jeanann Williams, stylist to the stars; Creative Artists Agency’s Lauren Hale, and Leslie Sloane, who launched Vision PR last year (she’s backed by Weinstein), all attended the cozy dinner. “The first time I ever styled Naomi she wore Marchesa at the Venice Film Festival in 2012,” recalled Williams. “You can always spot a Marchesa in the draping and in the use of embroidery.”

The shoes also feel quite feminine, with laser-cut detailing and satin bow embellishments. “I love a sexy strap,” said model Chanel Iman, who remembered walking in one of Marchesa’s shows at the beginning of her career. “I feel so classy and sophisticated and elegant when I’m wearing their clothes — like a superstar,” she said.

Marchesa’s spring 2016 collection is a 28-shoe range, priced from $500 to $1,200. The duo has partnered with AKH Group, a footwear and handbag licensing company founded by Annelie Hofstrom and Ashley Kennedy, for the lineup — though they still maintain design control. “Even when we worked with Louboutin we were very involved in the process,” said Chapman, referring to a previous collaboration with Christian Louboutin. “Keren and I have always aspired to have a lifestyle brand,” she continued.

“I think we’ve always thought about the whole look,” said Craig. “So the dress, the bag, the shoes and we have the jewelry line as well, so really for us it’s a dream come true.”