VF Corp. sportswear president Karen Murray was the chair of the event. 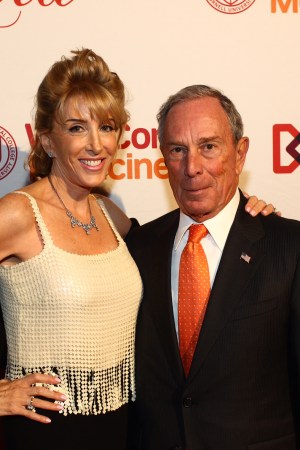 The guests at the annual Heartworks gala are an intrepid bunch. They braved large groups of protesters who had basically forced the closure of 42nd Street to express their displeasure with Donald Trump who was attending a GOP gala at the Grand Hyatt hotel across the street.

But the well-heeled group still managed to make its way into its own fund-raiser at Cipriani to raise funds and awareness for Marfan Syndrome, a potentially fatal connective tissue disorder.

The Heartworks gala, which was hosted by Broadway actress Julie Halston, honored three doctors from Weill Cornell Medical Center’s cardiac care team: Richard Devereux, Leonard Girardi and Mary Roman, who received Heroes with a Heart awards. Roman summed up the feelings of the physicians, saying she didn’t feel like a hero. “My heroes are my patients,” she said. “They inspire me to be the best doctor possible.”

Among their patients is Michael Murray, the son of Karen Murray, chair of the gala and president of the sportswear coalition of VF Corp., who said the night’s proceeds would be used to increase awareness of the often undiagnosed disease.

That’s exactly what happened to “Rent” playwright Jonathan Larson, who died of an aneurysm — a hallmark of the disease — in 1996. He was presented with a special award and his family was there in force to honor his legacy.

Larson was also honored through a rousing performance by the cast members of “Rent,” including three entertainers from the original production. The event raised $1.2 million.