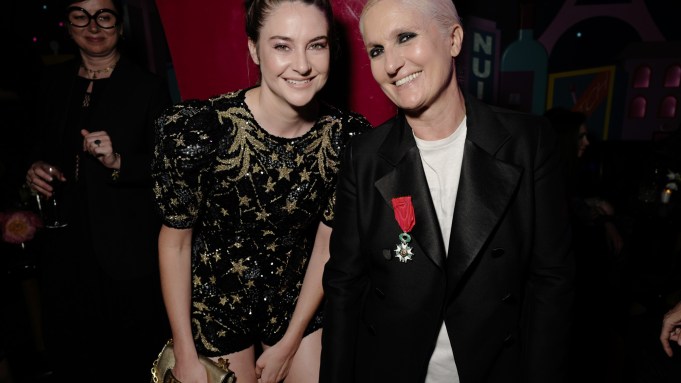 AVE MARIA: It had been a busy Monday for Dior creative director Maria Grazia Chiuri.

A couple of hours after her haute couture show for Dior, the Italian designer received the Legion of Honor, France’s highest civilian distinction, from France’s gender equality minister Marlène Schiappa at Dior headquarters on Avenue Montaigne.

The day ended at Castel, a sultry Left Bank club known for its risqué carpet motif and secret alcoves, where Chiuri danced with abandon to disco tunes, her red Legion of Honor firmly pinned onto her chest.

“She’s such an inspiration to me,” said model Lineisy Montero, who had walked the Dior couture show earlier that day, before hugging the designer.

American actress Shailene Woodley stopped by to congratulate Chiuri, while model Coco Rocha caught up with husband James Conran at a quiet table near the dance floor. “Our daughter had her first day of pre-school today,” said Rocha of Ioni, her four-year-old. “Apparently she has already made a friend.”