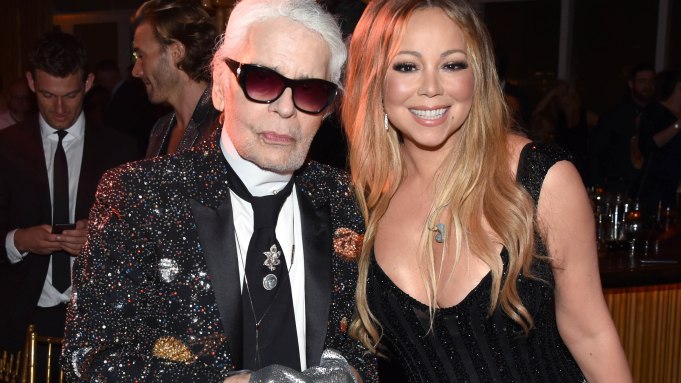 A “hero” indeed. On Monday night, Karl Lagerfeld — a man whose mere presence in New York was cause for celebration and serenade — entered the room of the Top of the Standard and, while still hidden in the shadows before the swarm of photo bulbs shone on him, made one last adjustment for the cameras: slipping on his signature sunglasses.

Lagerfeld — in New York for the WWD Honors, where he will receive the John B. Fairchild Honor — was met by Mariah Carey, who performed “Touch My Body,” “We Belong Together” and “Hero,” which she dedicated to Mr. Lagerfeld. The dinner, thrown by V Magazine, drew guests Gigi and Bella Hadid, Naomi Campbell, Kris Jenner, Joan Smalls, Mario Testino, Zosia Mamet, Ella Purnell, Bonner Bolton and more.

“I actually do remember the first time I met Karl,” said Gigi, momentarily separated from her mother and Bella. “It was my first fitting for my first Chanel show that I got, and obviously you expect for Karl to be there in the fitting when you get there, but I wasn’t quite prepared because the second I walked into the building Karl and Anna walk out together, going to lunch — and I hadn’t met either of them [yet]. So walking into that and just having to introduce myself like ‘Hi, I’m Gigi, I don’t know if you care.’ [That was] three, four years ago.”

“Karl is someone that I’ve admired my entire life — since I was a teenager,” Jenner said, re-entering the party after having run into Testino. “It was always an aspiration to even have a piece of Chanel in my closet. I met him when Kendall started modeling for him and doing the shows. Such an honor.”

Lagerfeld held court at his table after walking in with the Kroenig boys, who spent the better part of the cocktail hour adorably alerting guests it was time to take their seats. Between courses Carey took the stage, telling the crowd it was an especially notable night for her as it marked the 15th anniversary of her father’s passing.

Calling him the “best designer of our time,” Martha Stewart recalled meeting Lagerfeld in his atelier for a story for her TV show. “We talked fashion, he took me through the workrooms, and it was extraordinary. It’s phenomenal,” she said, having whipped out a camera to snap photos of the designer upon arrival. “You can look at it, I think, on YouTube.”

“I’ve never met Karl…[maybe] tonight in the Boom Boom Room,” said Mamet. “Oh, we can’t call it that anymore, right? ‘Top of the Standard.’ We had our first ‘Girls’ party here and it was called the ‘Boom Boom Room,’ and then I came to an Andrew Saffir premiere party and suddenly it was called something else. I think they didn’t like the connotation? But ‘Boom Boom Room’ is such a cooler name…it makes me think of, if I had really hip parents where they would’ve partied in the Seventies.”

Bolton too was less familiar with the legendary designer, though he was hoping his chosen cowboy hat for the night might win him some points.

“It was a special request for this event. Stephen Gan and I are close friends and he requested that I bring my black cowboy hat,” the model said. “The black one, because this is obviously a black suit kind of thing. I usually keep a nice one for the season — coming into winter, a felt hat is nice for winter. Keeps you warm.”

New Book ‘Sneakers’ Explores the Hype Behind the Footwear Phenomenon

Illustrator Julie Houts Pokes Fun at Fashion in ‘Literally Me’

Is ‘Dynasty’ the New Big Fashion Show on TV?