The occasion was to congratulate the three actresses for their separate covers on the May issue of Marie Claire magazine. 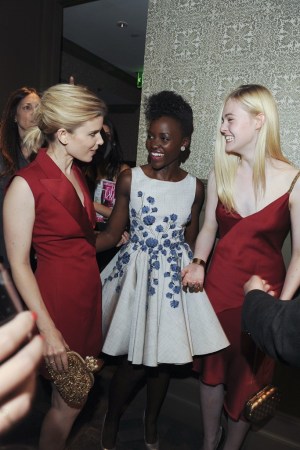 In the high school cafeteria that is Hollywood, three of the prettiest girls in class at the moment are Academy Award winner Lupita Nyong’o, Elle Fanning and Kate Mara.

The three actresses — two of them, Nyong’o and Fanning, the faces of Miu Miu’s spring campaign — turned up at Soho House in West Hollywood for a party in their honor. It was Tuesday night, and they were surrounded by an abundance of other fresh-faced beauties, “It” girls from classes past and future — Zoey Deutch, Mena Suvari, Ari Graynor, Jordana Brewster, Nikki Reed, Sarah Hyland, Paz Vega, Jaimie Alexander, Sasha Alexander, Lyndsy Fonseca, Naya Rivera and Katheryn Winnick. The occasion was to congratulate the three actresses for their separate covers on the May issue of Marie Claire magazine, where they are joined by the “Game of Thrones” actress Emilia Clarke and Elizabeth Olsen, who is a Miu Miu face as well.

“It’s my first American cover, so it’s very special for me,” said Mara, who added that her shoot “only took a couple hours” and “felt really effortless and relaxed.” Once inside, she palled around with her fellow cover girls, whom she hadn’t previously met. “I’d love to work with all of those girls one day. I think they’re incredible actresses,” she said.

Nyong’o hammed it up with her longtime pal Danai Gurira inside the party’s photo booth. “It’s lovely to meet other women who are trailblazing and doing what they love and being true to themselves,” she said. For her part, Fanning said she met Nyong’o and Olsen at last month’s Mui Mui show in Paris. Maybelline and Hearts on Fire were sponsoring the party, and so the teenager — who celebrated her 16th birthday the morning after the soiree — commented on her beauty routine. “I go to school with a clean face. I don’t wear much makeup. So when I think of beauty, I don’t think about eyeliner or anything. I think about someone being comfortable in their own skin.”

Mara agreed. “I know it sounds cliché, but if I’m feeling good on the inside, I generally feel like I look much better on the outside,” she said, then laughed. “But of course there are lots of tricks that you can do to make yourself look good. So I assume the beauty issue will give us some good pointers.”