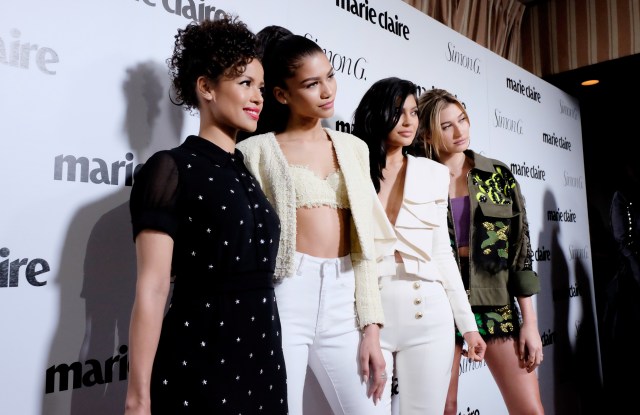 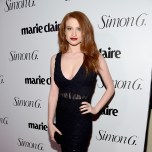 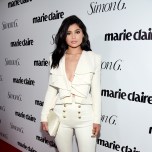 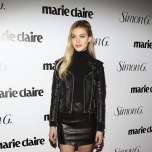 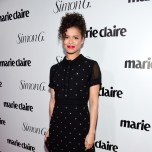 In Hollywood, longevity is key. While the town is swimming with PYTs clutching tightly to their 15 minutes of fame, others are working overtime to maximize the moment. Marie Claire celebrated four of them — Kylie Jenner, Zendaya, Gugu Mbatha-Raw and Hailey Baldwin — with “Fresh Faces” covers and a Monday night bash at the Sunset Tower Hotel.

“We started this three years ago to celebrate women who we thought were really having a moment,” said editor in chief Anne Fulenwider. “They may not have been the obvious choice for a single cover, but they will be in five minutes. In some cases, you can argue that time is now, anyway.”

For Mbatha-Raw, there was no argument; she was simply flattered to be considered “new.” “It’s such an honor for me to be on the cover with these other exciting women when I’ve been acting for a while,” she said. Of the novelty, the English actress attributed it to choosing roles carefully and avoiding Twitter, Instagram and Facebook. “I’m not on social media. I try not to saturate people with my personal life so they can believe in my acting,” she said.

Although the formula works well for Mbatha-Raw, online followers seem to amplify Zendaya’s appeal. Inside, the “K.C. Undercover” star went right to work documenting DJ Michelle Pesce and the atmosphere for her 6.45 million Twitter followers before retiring to a cream chair that matched her vintage Chanel jacket and bustier, to take more selfies. Although the Disney star has been romantically linked to NFL player Odell Beckham Jr., she took her father as her date.

Just around the corner were party BFFs Jenner and Baldwin. The pair captured their moment by posing for portraits at a photo station on the terrace among guests including Whitney Port, Jaime King, Sarah Hay, Iliza Shlesinger, Sabrina Carpenter and Lana Condor.

Mused “Flesh and Bone” breakout star Hay, “My life’s not as glamorous as everyone else’s here because I’m just starting out. I did one show and got all these nominations so I’m just riding the wave and seeing what happens.” Unlike many in the room, Hay, a professional ballet dancer, wasn’t originally seeking the Hollywood spotlight. “I actually never wanted to be an actress until I got [“Flesh and Bone”]. That’s really crazy when you find your calling. You’ve been doing something your whole life and realize, “Maybe there’s something better for me.”