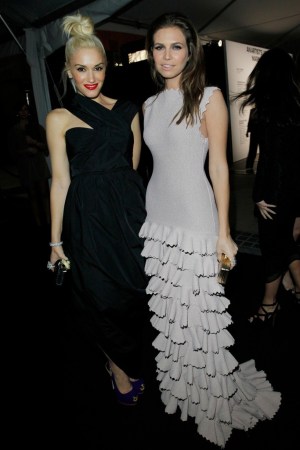 “I’ve never done a gala, so I had to find a way to balance art and entertainment,” said Marina Abramovic, the performance artist and provocateur charged with directing the Museum of Contemporary Art’s fourth annual gala. “It’s an experiment, truly.”

Suffice it to say that Saturday night’s event, titled “An Artist’s Life Manifesto,” stood out in a crowded season of art benefits by pushing personal boundaries within what is typically an expensive dinner party (the event raised $2.5 million for the Los Angeles museum). After a requisite cocktail hour, where guests air-kissed, hobnobbed with artists such as Ed Moses, Ed Ruscha, John Baldessari, Francesco Vezzoli and Piero Golia, and strolled through the museum’s galleries, the 750-person crowd was directed upstairs to the giant dinner tent erected over Second Street, where they were required to put white lab coats on over their finery.

Most, including Kirsten Dunst and Jaime King, gamely queued up and put them on, while Dita Von Teese sailed past.

“I’m not putting anything over this,” she said, gesturing to her Jean Paul Gaultier gown.

“Have you got a large?” asked Norman Lear. This being L.A., quantities in that size were limited, forcing many men, like Los Angeles Mayor Antonio Villaraigosa, to squeeze into a medium or remove their dinner jackets.

What awaited guests inside rendered even the most jaded event goers momentarily speechless, a reaction savored by both Abramovic and MOCA director Jeffrey Deitch, who told her it was “amazing.” Female models lay naked on rotating circles set in the middle of round dinner tables, draped in anatomy-class skeletons, a version of Abramovic’s 2002 work “Nude With Skeleton.” At the long tables, living models’ heads were positioned every few feet, alternating with the floral centerpieces. These models were also apparently also nude and kneeling on lazy Susans under the covered tables.

A card placed on each plate, admonishing “Look But Don’t Touch,” outlined rules for interaction with the “centerpieces,” including “No touching, feeding, offering drink or disrespecting.” Speaking to the models was also forbidden.

“There is a time and place for everything, and this isn’t it,” said Mario Grauso as he tried to eat his salad while a centerpiece gazed at him from inches away.

“I’m kind of into it. I like that everyone is sort of uncomfortable,” said a Rodarte-clad Tavi Gevinson, who was seated at Dasha Zhukova’s table along with Kate and Laura Mulleavy, Hedi Slimane, Doug Aitken and Gwen Stefani. Luckily for the teen, she was at one of the PG-13 long tables. “I’m having a staring contest with him,” Gevinson said of the stoic male model stationed near her dinner plate.

MOCA trustee Wallis Annenberg summed up the experience with the most commonly used word of the night: “interesting.”  She offered, “It really is refreshing.”

Meanwhile, her dinner partner, California Governor Jerry Brown, said, “I am enjoying myself. The dinner is wonderful and the company…unusual.”

After Abramovic read her manifesto aloud with help from a chorus, Debbie Harry provided the finale, prancing up and down the runway, singing a medley of her hits. “She’s 65, like me,” said the artist. “But we still have a lot of energy.”

As nude life-size cake replicas of Abramovic and Harry were carried in on stretchers and placed on the stage, the two women raised enormous knives above their heads and dug in. Harry then grabbed what appeared to be a fake heart from the red velvet cake.

“I was really looking forward to dessert until now,” said one guest.

Stefani, meanwhile, thrilled at the display.

“This is amazing,” she told Abramovic as the crowd went wild, licking toes and nether regions of the cakes and recording the spectacle on cell phones. “I have to go up there and take a photo.”

“I think I can safely say that this takes the cake,” quipped gala co-chair Maria Bell.