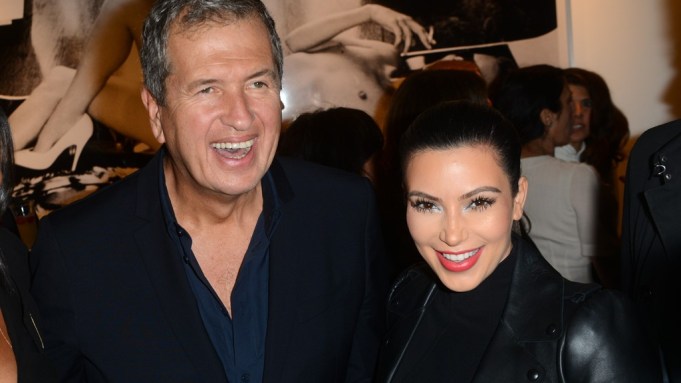 Oscar weekend fixture Mario Testino this time had his own reason to celebrate — his first Los Angeles exhibit at Prism gallery in West Hollywood on Saturday night.

“I’m always here for Oscar weekend, so I thought this was the perfect opportunity to do something other than go to a party, even though those are work for me since I’m always documenting them,” said the photographer, who gave Prism owners PC Valmorbida and Jared Najjar free reign over his archives to curate the 22-work show. Even before the party began heating up, several of the large-scale photos, including a couple of Kate Moss, were already spoken for. Taking in a nude Fernanda Lima shot in Rio de Janeiro, Katie Lee reasoned, “That has to be in Brazil judging by her ass.”

Carolyn Murphy, who was joined by fellow models Erin Wasson, Liberty Ross and Alessandra Ambrosio, concurred, saying the best fashion photographs are due to “the chemistry of the team.”

“It’s the photographer, the model, the hair, the makeup, the stylist,” the veteran model said. “It’s definitely not a one-man show.”