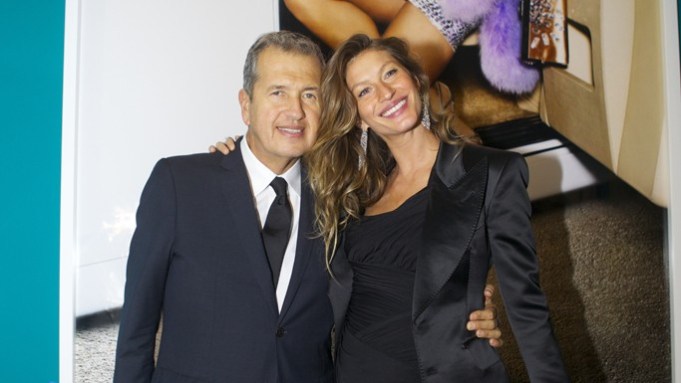 Guests at the opening of Mario Testino’s first U.S. show, which made its debut Wednesday at the Museum of Fine Arts, Boston, were happy to share their favorite memories of the photographer.

Gisele Bündchen, glowing and visibly expectant in a Halston dress and Tom Ford blazer, recalled Testino livening many shoots by singing, in one instance belting out Toni Braxton’s “Unbreak My Heart.” (Testino, who admits he loves pop, had the museum stock Rihanna, Amy Winehouse and Grace Jones, among others, in the exhibit’s gift store.) Bündchen said Testino’s charm coaxes his subjects into doing outlandish things.

“You think, ‘Oh great, I look great, this is great and the next thing you know there is your butt on the cover of a magazine,’” she laughed, referring to a 2008 V magazine cover involving a shredded pair of denim shorts. That shoot went viral when paparazzi descended on the private Malibu beach just as Gisele’s derriere was getting prepped for close-up. Her husband, Tom Brady, had the Testino treatment in a V Man shoot earlier this year featuring an aggressive dog. In the portrait, which is part of the show, both man and dog are snarling.

“He came home that night with bites on his arm,” the model said. “I mean, who is able to get someone to let a dog bite him?”

“Mario Testino: In Your Face” features portraits spanning 30 years and will run until Feb. 3. Though Testino omitted some more risqué selects, there is plenty of skin on view, whether it’s a close-up of Courtney Love’s visage splotched with bruiselike makeup or a full-length nude of Natalia Vodianova. The show runs in tandem with Testino’s “British Royal Portraits,” both of which are sponsored by Stuart Weitzman and Swarovski.

Anna Wintour recalled being summoned to England to take over British Vogue and needing a passport photo for her son Charlie, then a few days old. She called Testino, who shot mother holding babe in arms.

“I still have it,” she said praising Testino’s work for its enduring optimism. “He has a love of life, a love of people, so there is never anything gloomy or depressing in Mario’s work.”

Joan Smalls, in a two-piece Azzedine Alaïa look, described a shoot where Testino, having cast an international group of models, switched rapid-fire between English, Spanish, French and Italian.

“There he was, directing each of us in our own language,” she said.

After the opening reception, select guests gathered in the Koch gallery for a private dinner hosted by Stuart Weitzman.

The retrospective evening had Testino contemplating his own career. “I was too loud, I took up too much space,” he said of his youth. “In Peru, everything you do has repercussions for your family. I had to go.”

So he went to London. During early years there, he was so strapped, he lived in a derelict rooming house, stepping over passed-out drunks. He couldn’t afford bus fare.

“I’d have to stare out the window and pretend I’d already paid,” he said.

On Wednesday, his fortunes seemed much improved.