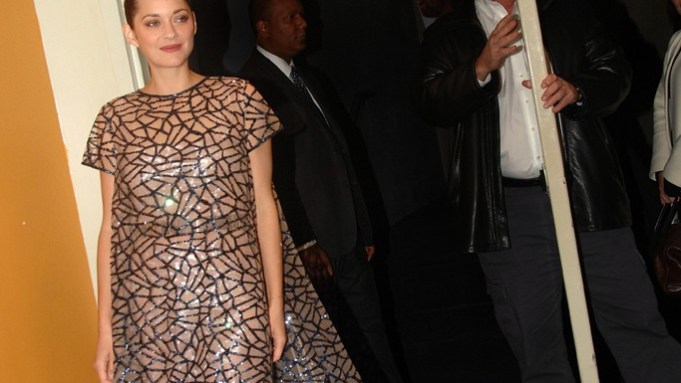 Marion Cotillard was barefoot on the press line at the Landmark Sunshine Theater in New York City on Thursday night. The Cinema Society and Dior were holding a screening of the Oscar-winning actress’ latest film, “Rust and Bone.” Sometime between walking for photographers and making it to the press line, she had passed her heels off to a publicist.

“I am so sorry, I feel very bad,” she explained, motioning to the towering footwear. “I had no choice.”

The apology was unnecessary. As a stream of rosy cheeked and heavily jacketed moviegoers arrived out of the Manhattan chill behind her and the carpeted floor went buckshot with dropped popcorn kernels, her decision to lose the heels seemed, as a relative matter, brave. The early winter storm in New York left Cotillard as the film’s sole standard bearer at the screening. Its director, Jacques Audiard, had been grounded and her co-star, Matthias Schoenaerts, would only arrive in time for the after party at Indochine. But by the time the first drinks were being poured, Cotillard would be off, due in Paris to unveil the Christmas windows at Printemps, designed in partnership with Dior. (She is after all the face of the Lady Dior handbag.)

On the Landmark Sunshine carpet, Cotillard dutifully fielded questions about her role in the broody French romance, in which she plays an amusement park killer whale trainer.

“I went once and I hated it,” she said of her preparations. “I don’t like to see those animals in that situation….The trainers [though] even though I don’t really get what’s happening in those places — how we do that — they were passionate about their job. And they really made my experience easy.”

About 16 hours later, Cotillard had made it to Printemps. Flanked by Dior chief executive officer Sidney Toledano, Printemps ceo Paolo de Cesare and Claude Martinez, president and ceo of Parfums Christian Dior, she pulled the curtain on a whimsical display of mechanical puppets in front of hundreds of onlookers at the department store’s flagship on Boulevard Haussmann.

Toledano said the window puppets were wearing miniature replicas of Dior designs spanning from the house’s groundbreaking New Look collection of 1947 to the creations of its new creative director, Raf Simons — all produced in its couture workshop on Avenue Montaigne.

“Our workshops enjoy a challenge — they have had harder tasks. This was a pretty fun project for them,” he said. Toledano said Dior has been collaborating with department stores since its inception, noting that founder Christian Dior made personal appearances at Neiman Marcus and Bergdorf Goodman back in 1947.

“In this case, 10 million people are going to pass on this thoroughfare during the Christmas period alone, so can you imagine the extraordinary impact it’s going to have?” he asked. “Some children will be filled with wonder, and among these children, there might even be a future Paris couturier. This is my wish.”

At a cocktail reception held at the Ladurée tea salon inside the store, Cotillard revealed that as a child, she was not big on Christmas traditions. “It was a bit of a battle for my mother. I didn’t really like Christmas when I was little, so I didn’t want any gifts, so the tradition was my mother figuring out how she was going to get me to pick something,” she said.

She has since grown to love Christmas, though she is still not that keen on presents.

“Gifts are something I prefer to give. It’s always nice to get one, but I like searching for a present, I like thinking of a person and finding that special something that they are going to like,” she said.

She will be back on an airplane in a matter of days to reprise her role as Joan of Arc in Arthur Honegger’s 1938 oratorio “Joan of Arc at the Stake,” which is being performed in Barcelona on Nov. 17 and 18. Cotillard will recite her text surrounded by a symphonic orchestra and three choirs. In New York, she was undaunted about the near constant flight.

“Well, you know, you sleep, you rest,” she said. “People live in terrible situations. Traveling is not that terrible.”