The Twenties period drama premiered at the Cannes Film Festival last year but will see wider release in coming weeks. 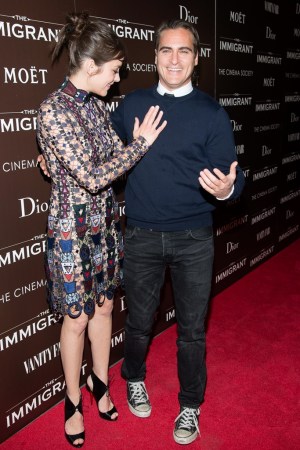 It was Tuesday night and the French actress was at a screening at the Paley Center for Media in New York of her new film, the Twenties period drama “The Immigrant,” which premiered at the Cannes Film Festival last year but will see wider release in coming weeks.

Cotillard plays Polish immigrant Ewa, a role written for her by writer-director James Gray. It’s one of several major roles in American films since she won the Oscar for best actress for “La Vie en Rose.”

“I just wanted to be an actress and tell great stories, but I didn’t expect to have the opportunity to work in this country,” she said. Her attendance at the screening was part of a slightly longer American tour that began Monday with the annual gala for The Costume Institute at The Metropolitan Museum of Art and will continue today with a stop at the Dior cruise 2015 show at the Brooklyn Navy Yard. She is the face of Lady Dior and the house sponsored the screening along with the Cinema Society, Vanity Fair and Moët & Chandon.

Cotillard appears alongside the notoriously media-shy Joaquin Phoenix, who breezed by reporters in worn-in Converse sneakers, jeans and a sweater. Visibly uncomfortable over the attention, he was later coaxed onstage before the screening where he hid behind Gray and Cotillard as they introduced the movie.

Afterward, the cast, along with Isabella Rossellini, Mark Feuerstein, Judd Hirsch, Josh Charles, Catherine Malandrino and June Ambrose, made their way to Beautique.

“I think we all have a little bit of the immigrant in our families,” said fellow French expatriate Malandrino. Charles, a recent casualty on “The Good Wife,” echoed that sentiment. “You think about all of the fractured lives that came here and started…and the web of lives that was built off of that. It’s beautiful.”