The "Annette" star took to the mic with Simon Helberg for a surprise rendition of the film's theme song.

Bijou Beach, set on the edge of Cannes and away from the bustle of the Croisette, is as much of a gem as the name suggests. It’s where Chanel and creative director Virginie Viard welcomed guests including Marion Cotillard, Tilda Swinton, Charlotte Casiraghi and producer Charles Finch to watch the sunset over the bay on the second night of the Cannes Film Festival.

Downsized from its traditional blowout, the intimate dinner was almost idyllic in its simplicity. With tables next to the water, local children splashed in the waves and ran across the sand, oblivious to the A-listers and Oscar winners just a few feet away.

“We’re all pinching ourselves,” Swinton said of the mood of the revived film festival, which in some ways feels as if it hasn’t skipped a beat. “We have to believe that cinema is going to find a way of adapting. Cinema has taken harder knocks than this and then it evolved. I truly believe it is going to be all right.”

Despite being a Chanel muse and often referred to as an icon, Swinton said she doesn’t know much about fashion per se.

“Fashion is about finding a way of going into a very brightly lit space as a shy person and feeling like you’re not alone,” she said of when she walks the red carpet. “In that moment, I’m fortunate enough to have my friends with me in a way, like Virginie or Karl Lagerfeld before.” Does the actress really categorize herself as an introvert? “Yes. I’m a very shy person, and I’m not into acting at all. I’m into friendship. I don’t do things by myself, you’ll notice. I’m always in a gang.” 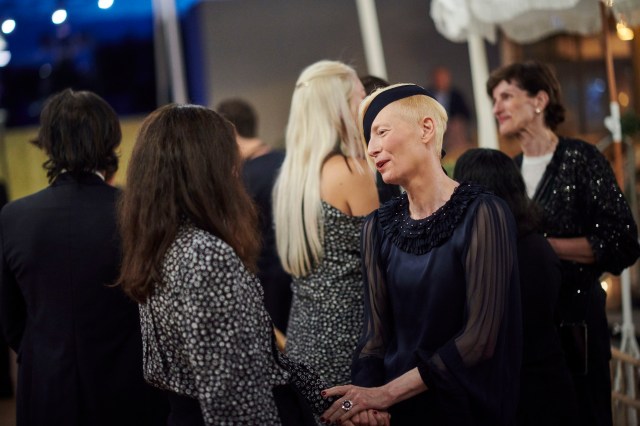 Swinton is most eager to catch up with that very cool gang while in Cannes, including Pedro Almodóvar and her “Okja” director Bong Joon-ho. And with what must be a record five films in the festival, she has no plans for sleep. “I’ve got my shoes off and we’re by the sea, I want to suck it all up while we can.”

Jury members Jessica Hausner and Mati Diop chatted in a corner, while “Annette” director Leos Carax and French singer Sebastien Tellier settled into white couches in the sand. Israeli actress Naama Preis, fresh from the Chanel couture show in Paris, said her biggest thrill was entering the theater to watch a premiere. “Just to enter this temple of cinema and watch a film, to watch art, is unique and important,” she said. Her short “The Star” opened Thursday.

French actress Rebecca Marder was celebrating her first film in Cannes, the World War II drama “A Radiant Girl,” and also noted how surreal the entire spectacle is after a year of restrictions. “I realized time has changed, and yesterday as I was watching the opening, I wondered if I was dreaming or if it was really happening again. I feel like we’re in another dimension.” 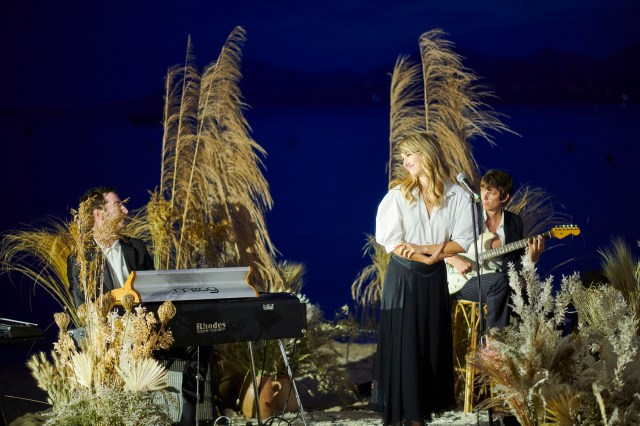 In what’s likely to be the most unique musical performance of this festival, professional whistler Molly Lewis took to a fluffy rug in the sand for a few beachy tunes. Perhaps inspired by the moment, Ron and Russell Mael — the brothers better known as Sparks — took to the stage, passed a mic to “Annette” stars Marion Cotillard and Simon Helberg and the group gave an impromptu rendition of the film’s theme “So May We Start” as gasps and whispers of “no way,” and “is this real?” spread through the crowd.

Helberg said his first time in Cannes was a “bit of an out-of-body experience” and not just because of the five-minute standing ovation the film received on opening night. “To sit in that theater and experience it with an audience, especially after the pandemic, it just had a lot of weight in that moment. It’s a nice kind of bookend to a dark year,” said the actor.

Despite being perched on the edge of the sea, Helberg confessed he wasn’t prepared. “I didn’t even pack my Speedo,” he joked, but vowed that it wouldn’t stop him from having fun if the evening called for it. “We’re in France. I know there are no maritime laws against a bottomless man frolicking in the water. I might put it to the test tonight, we’ll see how the night goes.” 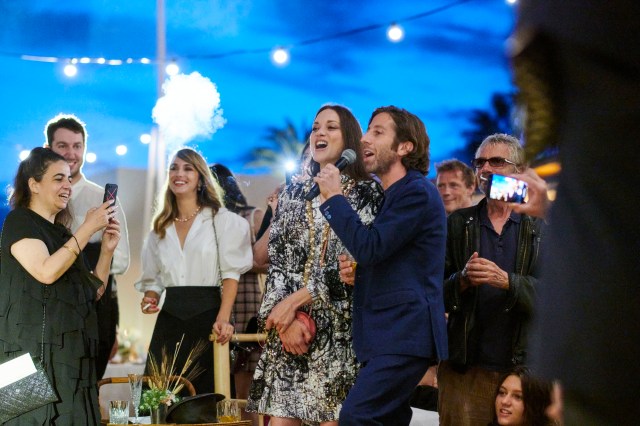 Marion Cotillard and Simon Helberg sing along to a Sparks song at the Chanel dinner.  Michael Buckner/WWD