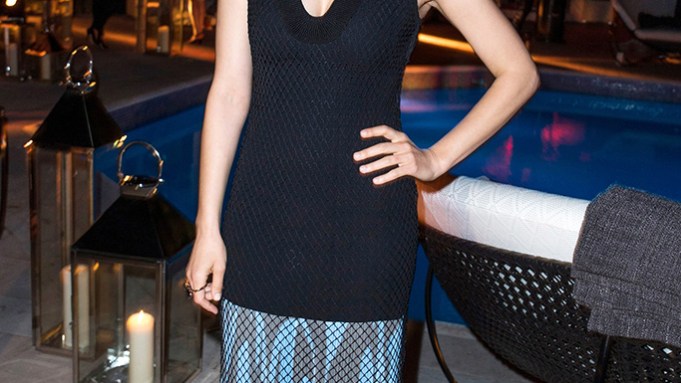 CANNES – The rose, it appears, is a recurring theme in Marion Cotillard’s professional life. It can only be guessed how studiously she practiced singing Edith Piaf’s “La Vie en Rose” in preparation for her performance as the French singer, which won her an Academy Award.

Seven years later, her chant-like voice is again key. The 39-year old was in Cannes Friday night to mark the premiere of Mark Osborne’s adaptation of “The Little Prince,” based on the Antoine de Saint-Exupéry book.

In the movie, Cotillard is lending her voice to “The Rose,”a character who the prince lovingly keeps under glass. “I don’t know if things are coming full-circle but it’s for sure an amazing experience,” said Cotillard, wearing a perky tennis dress from Dior’s latest Cruise collection.

“I actually played the rose once in a short movie directed by my best friend, but it was like — oh, I don’t even remember how long ago… we were in high school,” she said. “So I have a special relationship with the rose.”

Cotillard is doing both versions herself. And she chooses her words carefully to describe the difference. “I wouldn’t say that I felt more confortable in one language or the other, but it’s a different technical process that goes on in your brain when you deal with a foreign accent. While in French, I didn’t have to deal with all that. At the same time,the foreign language opens more doors for me because my voice has already changed with the language,” she explained, adding coyly: “Do you see how technical and boring it is?”

“Wow, she is very popular in India,” said Richa Chadda, upon hearing that Cotillard would join the dinner following the movie’s official screening, which was hosted by Dior, Cotillard’s maison, and Elle, on the terrace of the JW Marriott.

“For two of the films that I did my directors gave me ‘La Vie en Rose’ to watch as a reference,” divulged the Bollywood star, whose movie “Masaan” is competing in the parallel selection “Un Certain Regard.”

She said her film is controversial in India.

“We don’t know how the movie will be received. In India there is a lot of change right now – older people want to be traditional, younger people want to experiment with sexuality and Facebook and all that, but it’s already helped that the movie was in Cannes, because everybody is waking up to it,” she noted, looking festive in a color-block bustier ball gown by Andrew Gn.

Gallienne was waving a fan banner of his own. “I gave my voice to the snake; I’m the French Benicio del Torro. And I would have never imagined to say that sentence in my life ever,” said the French stage actor, who played Pierre Berge in Jalil Lespert’s “Yves Saint Laurent” last year.

“I actually read the Little Prince quite late, I was like ten or eleven, but I loved the piece so much that it became the first thing I ever directed as a play in my drama school — and it was terrible,” he said with a hearty laugh.

Despite her tender age, Mackenzie Foy is a veteran of animated movies. The 14-year-old, who already modeled for Polo Ralph Lauren and Gap, previously lent her voice to “The Boxcar Children” and “Ernest & Celestine.”

“But here it was different,” she said. “I worked once with Jeff Bridges, which was amazing, and then it was mostly me and Mr. Mark. It was this big open room and we could just mess around, make jokes and funny noises, and some of it made it to the film. Very experimental,” judged the movie’s “The Little Girl,” in an iridescent Oscar de la Renta robe sparkling against the backdrop of the French Riviera.

Her favorite passage in the book? “It is only with the heart that one can see rightly; what is essential is invisible to the eye,” she recited in a heartbeat and with perfect intonation.“It’s a classical one, but I love it.”

Osborne said it took five years to realize the project, which is to premiere in the U.S. before the end of the year. “The fact that it was an adaptation of such a treasured book made it complicated. But it’s been a family affair. My son is the voice of the little prince, my daughter was the model for the little girl in the beginning, she is credited as the little muse,” he smiled.

It was Osborne’s wife who introduced him to the French classic, originally published in 1943. “She actually had given me her copy of the book, back when we were dating in college. We were having a long-distance relationship and it was the perfect thing at the perfect time. She would often quote from it — it really bonded us together,” he recalled, adding: “And now we are married and have two kids.”

Cotillard  will spend the next few months working on Xavier Dolan’s version of “It’s only the end of the world,” alongside Léa Seydoux, Vincent Cassel and Gaspard Ulliel (think “Saint Laurent”).

“We will start shooting in four days,” she gave away, before being treated to royal crab and a 2012 bottle of Chateau Mouton Rothschild with view of the Croisette.