Mark Lee and Ed Filipowski hosted a dinner at their penthouse to toast the designer’s new windows at the store. 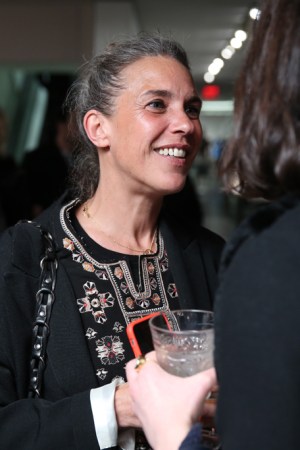 You’d be hard pressed to find an article on Isabel Marant that didn’t at least mention her provenance. “She’s got that Parisian cool thing down,” Mamie Gummer said, nodding emphatically on Thursday night. The actress was consuming the generous Jens Risom armchair, a vintage piece, off to the side in Mark Lee and Ed Filipowski’s living room. The couple’s prewar penthouse, splashed with Stephen Sprouse paintings and Richard Avedon originals, was populated with Marant-loyalists and Barneys brass, gathered to toast the designer’s new windows at the store. “I just feel like when you wear a dress of hers, you really can roll out of bed, no makeup, hair a mess,” Lily Rabe, added. “And walk around and feel chic and just…“ Rabe trailed off. “F—-g rad,” Gummer proffered. Marant herself was, at that moment, epitomizing the very girl her clothes allow her clients to emulate — effortless, boho and, yes, consummately Parisian cool.

“It was super!” Marant smiled, out on the wraparound balcony, her hair knotted daintily atop her head, cigarette in hand. She was describing the day before, which was spent shooting the label’s fall campaign at Pier 59 with Inez van Lamsweerde and Vinoodh Matadin. The campaign features Natasha Poly, as it had for spring. “From last season, we really set up a special mood that we’re going off of,” she continued, grazing her plate of truffle-tinged pomme frite. “I must say, I’m super happy with it.” The photographers, holed up in the kitchen, were far more evasive. “Not really…” Matadin chuckled when asked if they could discuss the shoot. The couple then began to take turns ticking off vague adjectives to describe the campaign: “energetic;” “powerful;” “strong;” and, of course, “chic”.