The director showed off a short film she made for the collaboration at the dinner party in Los Angeles. 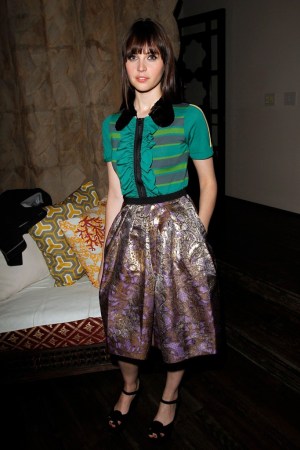 A few in Los Angeles didn’t have to wait until March 8 to get their hands on the Marni for H&M collection. On Friday, Sofia Coppola, Consuelo Castiglioni and Margareta van den Bosch hosted a dinner party to celebrate the collaboration, for which Coppola directed a video.

“They’re the kinds of clothes that you dream of wearing, so I thought it would be fun to do a daydream,” the director said.

“There are so many clothes you can’t afford, so I think it’s great you are doing this,” Winona Ryder told Castiglioni.

Other Hollywood Marni fans included Milla Jovovich, Drew Barrymore, Rashida Jones and Dianna Agron, while the European crowd was repped by Lou Doillon, Noomi Rapace, Andrea Riseborough and a slew of models. Guests were impressed by the templelike setting, called Sowden House, which was designed by Frank Lloyd Wright’s son, Lloyd Wright. Most didn’t realize that the night would also include a performance by Bryan Ferry.

“I used to walk to school and listen to ‘More Than This’ over and over. I loved Roxy Music,” said Ryder.

Even Mel Gibson came to hear Ferry sing without knowing anything about the reason for the party.

“Everyone outside was asking me, ‘You mean you don’t know about Marni?’ I don’t know what Marni is,” Gibson said.