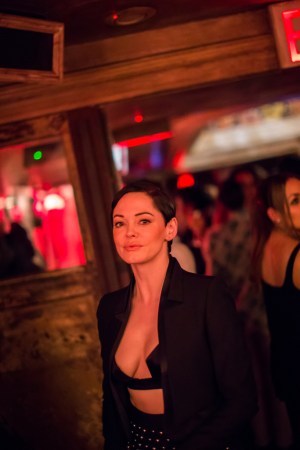 They laid out a family-style supper, hired The Misshapes and Chloe Norgaard to DJ, screened a short film directed by Rose McGowan, who also performed, and booked Mary J. Blige for her second gig of the week.

“We see the line as a celebration of women. And that’s really what tonight is,” said Anderson, who also moonlights as a filmmaker. Later on, Blige concurred: “I love being a woman — it’s the s–t.”

Before a crowd that included Francesca Eastwood (Clint’s daughter), Lauren Remington-Platt, Stella Schnabel, Langley Fox and Ann Dexter-Jones, McGowan gave her first-ever live performance, crooning — not too shabbily, in fact — “For You Only,” an original song she composed for the short.

“I’m used to hiding behind characters,” she said. This song, though, was more personal. “Am I a terrible person because I’m so happy we broke up because I got an awesome song?”

As serviceable as the actress’ musical stylings may be, she was no match for the Queen of Hip-Hop Soul herself, who is becoming a ubiquitous presence on the party circuit, making appearances at Tuesday’s amfAR gala in New York, the other amfAR gala last month in Cannes and the Life Ball in Vienna.

Lest anyone think she is just parachuting into these fashion parties for a couple of songs and some air-kissing, Blige gave a full-throttled, tireless performance that lasted for a little more than half an hour, including some of her standards, “Family Affair” and “Real Love.”

“It doesn’t get any easier, we just get stronger!” she said from the stage. Before her, the crowd swooned.