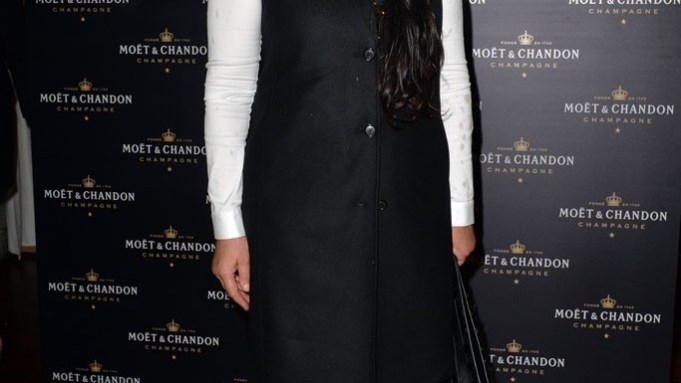 VENICE — The rain didn’t deter guests from flocking to the cocktail gathering held in Venice at the Hotel Excelsior’s Maserati terrace by Maserati and L’Uomo Vogue on Tuesday, the night before the city’s film festival opened.

“It’s part of my work, it’s the least I can do. It’s all about unconditional love, and I don’t care about privacy,” said Marina Abramovic, speaking generally about being photographed as she flipped through the September issue of the Italian magazine, featuring the artist and James Franco on the cover. Abramovic, whose documentary film titled “James Franco: The Last Unicorn,” was previewed after the event at Palazzina Grassi, said she found him “very interesting, as he is multifunctional, a true Renaissance man, trying so many different things when he doesn’t need to.”

Franco was expected later in the week at the festival. Abramovic carved out time in Venice from the preparation of her homage to Edward Munch in Oslo, which will celebrate the 150th anniversary of that artist’s birth this year. On Oct. 24 in the Norwegian capital, Abramovic will premiere a film casting 300 individuals, “from sailors to lawyers,” including herself, screaming — a nod to the famed “The Scream” painting by Munch. Photos from that performance will then run “everywhere in the city,” said Abramovic.

L’Uomo Vogue editor in chief Franca Sozzani said that “photographing Abramovic, an artist who interprets different roles, together with Franco, an actor who is an artist, made sense as never before,” celebrating both the Art Biennale and the film festival.

Among the guests were Francesco Vezzoli, Stefano Accorsi, Eva Riccobono, godmother of the film festival, and actress Clotilde Courau, who said she will debut as a “special secret police agent” in a “complex, nuclear-political” six-episode film for French television at the end of September that also stars Christophe Lambert. The night ended with a dinner and party sponsored by Moët & Chandon.