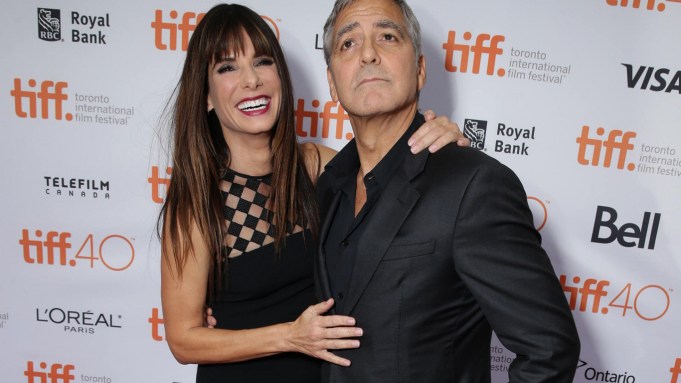 The highest concentration of stars on Friday night was north of the border, as the Toronto International Film Festival brought out the big guns for a trio of major premieres. Awards season may still be several months away, but the cast of “The Martian” — Matt Damon, Jessica Chastain, and Chiwetel Ejiofor — treated the film’s debut at Roy Thomson Hall as if they were already campaigning hard. Unlike at most red carpets, the film’s cast, crew, and handlers made every effort to cater to the press, with no stars skipping interviews.

In the film—directed by Ridley Scott and based on a novel by Andy Weir—Damon’s character gets trapped on Mars, where he learns to fend for himself. With so much solo time on screen, Damon said he depended mostly on “coffee, I guess” to keep his energy up. The actor looked as though he could have used a cup by the time he reached the carpet’s very long end, but he gamely answered questions such as, what did he learn about “earth” while “living life” on Mars? “That it’s nice to be around people,” he laughed, before pondering the three things he’d bring if shipped off to space. “My wife, my kids, and my shrink!”

Chastain said the experience was the only souvenir she needed. “I went to Jet Propulsion Labs in Pasadena and NASA in Houston,” she said of training for her role as an astronaut. For the occasion, she ditched her space suit in favor of a blue dress. “It’s Givenchy,” she purred, before heading inside.

Kate Mara, who plays a computer expert, said she prepared by spending “a lot of time on my computer. I Google searched a lot of words that I did not understand in the script,” she said. “I haven’t seen the film yet. I’m about to see it now…. It was a dream come true. I got to work with a lot of people that I really admire.”

Sebastian Stan echoed the sentiment, though he admitted to a case of first day jitters. “It was actually a little bit intimidating working with Jessica Chastain,” he said, adding that their trip to Toronto was the first time many of the cast had met since they don’t all share scenes with one another. “I didn’t work with Chiwetel or Jeff Daniels or any of those guys. They’re almost in a different film. They were on earth so to speak, and had courtroom scenes. We were all concerned with anti-gravity and being in a spaceship.”

Those who did work together bonded quickly since they spent a year filming in Budapest. “We would go to clubs and bars and we’d talk and have dinners together,” said Donald Glover, who added that he was prepared to keep the party going after the premiere. “I’m trading numbers. I’m like, ‘Okay. We’re meeting here.’”

Newcomer Mackenzie Davis said she was still making sense of the moment: “It’s bizarre to see movie stars and then not be on the other side. It’s very cool to get to walk this red carpet.”

“The Martian” capped off a long day of premieres that began at the Princess of Wales Theatre with “The Lobster,” starring Rachel Weisz.

In the film, which takes place in a dystopian universe, single people are — by law — taken to a hotel, where they’re forced to seek a compatible mate in 45 days or else risk being transformed into beasts sent into the woods. Weisz said it was the script’s romantic nature that most appealed to her. “I thought it was completely unique. I thought it was a little bit like ‘Romeo and Juliet’,” she said. “Forbidden love is quite a hard story to tell now without it being it being cliche.”

A few hours later, crews re-assembled on the red carpet for the premiere of “Our Brand is Crisis,” the drama that has many betting on a second Oscar nomination for star Sandra Bullock. In theaters next month, the film is based on a documentary of the same name which follows the use of American political campaign strategies in South America.

Bullock said that, while the project exposes the underbelly of politics, it’s just as relevant to any business. “It exists in every big business. There’s manipulation in the business that you guys do,” she said, pointing to cameras for emphasis, “in the business that I do. It’s not just politics. It’s everything. It’s good that we’re able to uncover and show everyone what it actually looks like, so that maybe we can step back and maybe make better decisions.”

She added, “Way back in the day, there wasn’t this sort of exposure because of the media. I think now there’s no way to hide. You were able to hide a lot of darkness way back in the day that I don’t think you can do anymore.”

There was one surprise guest that evening: George Clooney, who produced the film with Bullock. Why the last-minute appearance? “Free booze!” Clooney joked, before getting serious. “This is a project [producer] Grant Heslov found eight years ago as a documentary and an article. To have a script and then have it flipped and have Sandy play a role that was originally written for a man and now to be here? That’s a pretty exciting thing. It’s really fun.”

For those confused about whether the film is a comedy or drama, Bullock clarified, “It’s both. Life is both drama and humor. If you look at our election, there’s a lot of humor and there’s a lot of tragedy. Life is tragic, but you know you’re going to be laughing at it at some point, just at the absurdity of it.”