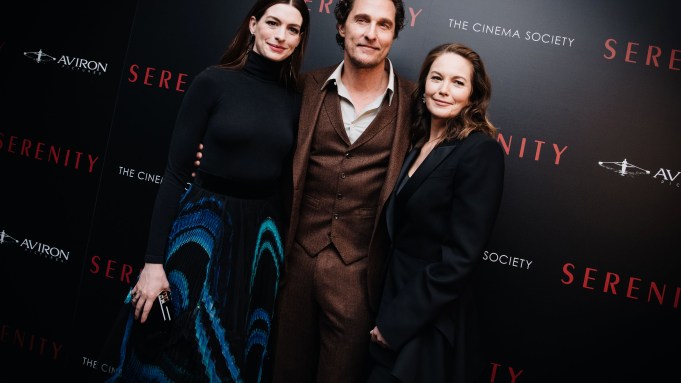 He was inside the Museum of Modern Art for a screening hosted by Aviron Pictures and The Cinema Society of the new film “Serenity,” with his costars Anne Hathaway, Diane Lane and writer/director Steven Knight. The movie concerns a fisherman whose ex-wife asks him to kill her current abusive husband by taking him out on a boat and throwing him overboard.

“The overriding halo is when and if it is OK for good people to do bad things for good reasons,” he said, sporting a brown suit and a Jackson Maine tan, his curly golden hair slicked back partially. “That’s an age-old moral question that philosophers and theologians have been working on. Political systems, law systems, justice systems are built on that. That’s a question that’s ongoing.

“There are a lot of after-screening discussions people can have after this,” he added.

Lane, who plays McConaughey’s lover in “Serenity,” had a decidedly more lighthearted outlook on the film. She said her very first moments on set required her and McConaughey to act out the love scenes, and that McConaughey assuaged any awkward feelings by setting an easy and humorous tone, and keeping discussions fluid.

“If there is a love scene, it will be on the first day of filming,” she said. “The cinema gods — they don’t know another way to start a film. It’s mandatory.”

Hathaway made her way down the line, flipping her Givenchy Couture skirt with a long, mermaid-like tail when someone almost stepped on it. She said Knight was collaborative in the storytelling process, and although he’d crafted the story to a T ahead of time, he left details open to interpretation as well.

“The first thing he said to me about my character was that she didn’t love Matthew’s character,” Hathaway recalled. “And I just blurted out, ‘I don’t agree!’ A lot of people would have been offended by that, but he wasn’t. We both said, let’s have a conversation about the distance between the two points and let’s better understand it. And that became a question we wanted the audience to ask.”

Following the screening, McConaughey and Hathaway met in the hall outside the theater and hugged. The “True Detective” actor rushed outside with his wife Camila Alves in tow. He avoided paparazzi stationed in front of MoMA and hustled into a black SUV. Hathaway made her way to the after party, which was held on the rooftop of Magic Hour in Times Square.

The venue filled up quickly — with “Orange Is the New Black” actress Emma Myles, Pat Cleveland and Carson Kressley in attendance. Hathaway chatted with friends at the bar while Lane took her seat at a VIP table. Cleveland came over to Lane to say hello and shake her hand. The former model then turned to a bespectacled man sitting in the booth and said, “Are you the villain from the movie? You took on that role so well!”

Turns out, no. He wasn’t the actor Jeremy Strong. He was Mitt Romney’s former press secretary Ryan Williams.

Meet Carmen Ejogo of the Latest Installment of ‘True Detective’