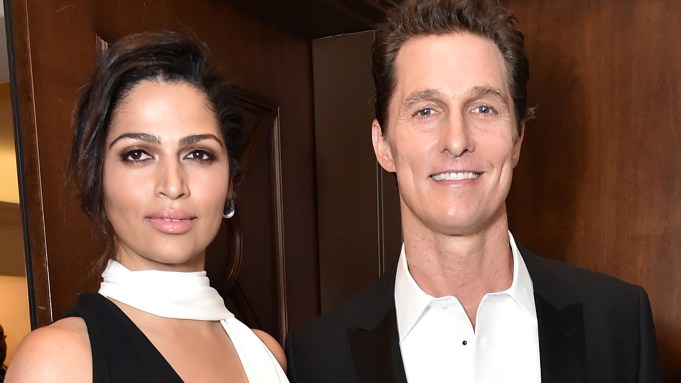 Thursday night was all about the do-gooders as Hollywood turned up for a charity gala to honor a few of its own.

Celebrity honorees for the evening included McConaughey and his work for the Just Keep Livin’ Foundation, Rogen and Lauren Miller for Hilarity for Charity, Rodriguez for We Will Foundation, Wilde for Save the Children and Freeman for the Tallahatchie River Foundation. Others honored included David Meltzer with the Sports Humanitarian Award, Dorian Murray with the Saint Vintage Love Cures Award, Ann Gloag with the Global Philanthropy Award and Liz Hausle with the Women Empowerment Award.

Adam Pally kept a steady flow of jokes going at the podium as the evening’s emcee, promising the crowd he’d keep the show moving because “no one wants to be at a charity event any longer than they want to be.”

Pally stood in for comedian Sarah Silverman, who was sick and couldn’t make it to present Rogen and wife Miller with an award, saying, “I’m so glad Sarah Silverman came down with a fake flu,” prompting laughter from the crowd.

It was Freeman who brought the crowd to its feet as most of the room stood as he took the stage. To calm the applause, he told the audience, “All right, you want to get out of here, sit down,” before turning serious to talk about his foundation. “I don’t think of this as charity,” Freeman said. “This is doing what I have to do.”

McConaughey rounded out the evening, and as with everyone before him, flashed a spotlight on his charity, noting the timing appropriate as “a great weekend to do it” with the Oscars just days away.

The actor and his wife Camila started the foundation and named it based off of a line that materialized while McConaughey was filming “Dazed and Confused.” So it seemed only fitting he ended the night leaning into the podium to tell the crowd “Just keep livin’.”